Want some stocks that give you a regional to national growth plan?  How about if they also don’t have much, if any, exposure outside the U.S. yet? You’re in luck. There are plenty of stocks that fit that description: safety in the U.S. with growth to drive their share prices higher.

Below, I highlight three food service companies that have been delivering that growth lately and are likely to continue to do so going forward: Chipotle Mexican Grill, Inc. (NYSE:CMG), Buffalo Wild Wings (NASDAQ:BWLD), and Dunkin Brands Group Inc (NASDAQ:DNKN).  I covered all of these stocks back in January when I put Chipotle Mexican Grill, Inc. (NYSE:CMG) in a portfolio of 10 Stocks for 2013 (see here). What have they done since Jan. 1?  See for yourself below (as of April 9). Chipotle has actually been the laggard of the group, up only 10.5%. All three companies have easily outperformed the S&P 500. 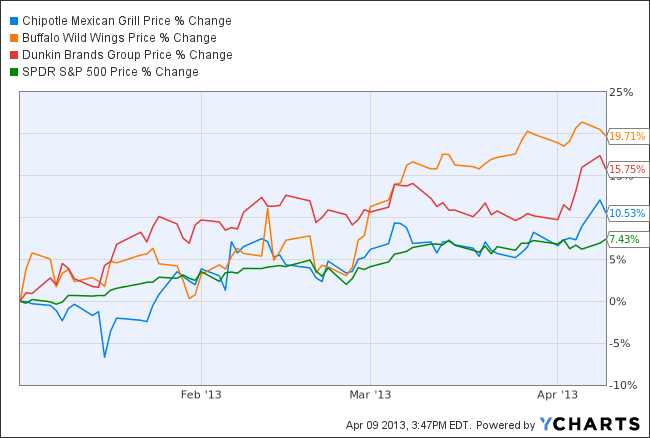 This fast-casual, Mexican food is finally recovering from the beating it took in 2012. As you can see though, Chipotle Mexican Grill, Inc. (NYSE:CMG)’s stock has been a great long-term buy, especially on any big pull-backs, and has significantly outperformed the broader market. 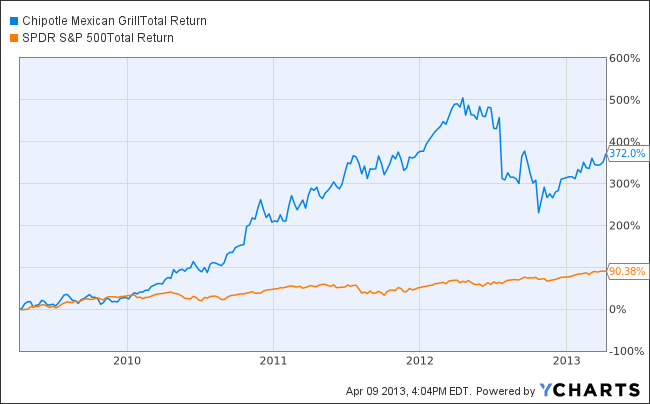 Chipotle Mexican Grill, Inc. (NYSE:CMG)’s stock slipped in 2012 when it started to report growth and same-store sales comparisons that were not sufficient to most investors to support a P/E of twice its growth rate. That ratio is still high around 1.5x, but now is a decent value for a company with such a solid track record and such a big growth opportunity. Also, disappointing same-store sales numbers were being compared to previous years of monster growth, so it’s not surprising that they only had growth in the mid-to-high single digits.

Chipotle continues to open restaurants at a rapid pace, bringing on board 183 during 2012, giving them a total of 1,410 stores. That helped grow revenue 20% over 2011. So, even though the same-store sales comps are slowing down into the high single digits, Chipotle continues to drive top-line growth by adding so many new stores. Chipotle expects similar new store growth in 2013.

The one big difficulty that Chipotle Mexican Grill, Inc. (NYSE:CMG) has run into is rising food costs. They’ve decided to be patient and not raise prices over the past couple of years. That has taken a bite out of their net income, which hasn’t grown at nearly the same rate as its revenue. However, Chipotle announced back in January that they may look to raise prices in mid-2013, giving investors some hope that the bottom line growth may start to catch-up with the top-line growth.

All-in-all, it’s tough to bet against Chipotle Mexican Grill, Inc. (NYSE:CMG) as it has consistently proven any doubters wrong to this point. It had a tough time last year, but even the most successful stocks don’t go up in a straight-line. The 2012 dip had given investors an opportunity, and it’s not too late to get in either.

Another food stock with good growth but struggling with food prices is Buffalo Wild Wings (NASDAQ:BWLD). This company operates restaurants in the U.S. that focus on chicken wings and alcohol sales. It hasn’t outperformed the S&P 500 quite as much as Chipotle over the past four years, but it has provided additional returns nonetheless. 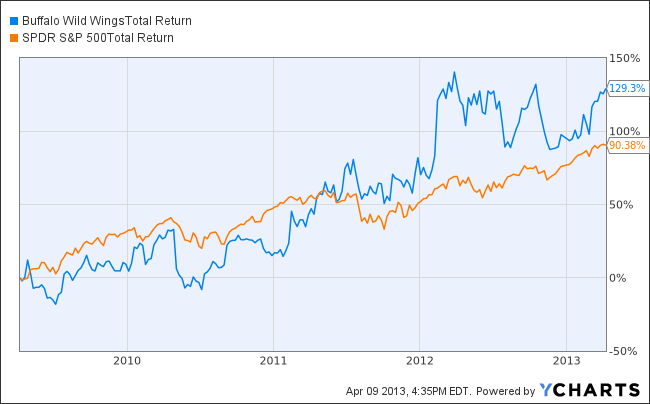