Looking for stocks with high upside potential? Just follow the big players within the hedge fund industry. Why should you do so? Let’s take a brief look at what statistics have to say about hedge funds’ stock picking abilities to illustrate. The Standard and Poor’s 500 Index returned approximately 13.1% in the 2.5 months of 2019 (including dividend payments). Conversely, hedge funds’ 15 preferred S&P 500 stocks generated a return of 19.7% during the same period, with 93% of these stock picks outperforming the broader market benchmark. Coincidence? It might happen to be so, but it is unlikely. Our research covering the last 18 years indicates that hedge funds’ stock picks generate superior risk-adjusted returns. That’s why we believe it is wise to check hedge fund activity before you invest your time or your savings on a stock like China Mobile Limited (NYSE:CHL).

China Mobile Limited (NYSE:CHL) investors should be aware of a decrease in hedge fund sentiment lately. Our calculations also showed that CHL isn’t among the 30 most popular stocks among hedge funds.

At Q4’s end, a total of 14 of the hedge funds tracked by Insider Monkey were long this stock, a change of -7% from the second quarter of 2018. Below, you can check out the change in hedge fund sentiment towards CHL over the last 14 quarters. With hedge funds’ capital changing hands, there exists a few noteworthy hedge fund managers who were upping their stakes considerably (or already accumulated large positions). 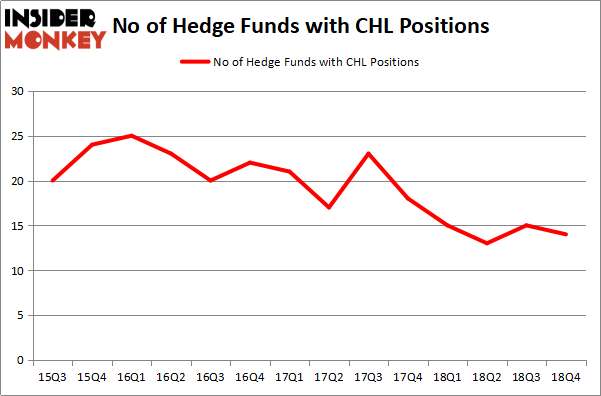 The largest stake in China Mobile Limited (NYSE:CHL) was held by Renaissance Technologies, which reported holding $235.1 million worth of stock at the end of September. It was followed by LMR Partners with a $65.6 million position. Other investors bullish on the company included Ariel Investments, Arrowstreet Capital, and Two Sigma Advisors.

Judging by the fact that China Mobile Limited (NYSE:CHL) has faced falling interest from the aggregate hedge fund industry, it’s safe to say that there was a specific group of funds who were dropping their full holdings heading into Q3. Intriguingly, Matthew Hulsizer’s PEAK6 Capital Management dumped the largest stake of the “upper crust” of funds tracked by Insider Monkey, worth an estimated $2.2 million in stock, and Matthew Tewksbury’s Stevens Capital Management was right behind this move, as the fund cut about $0.7 million worth. These moves are interesting, as aggregate hedge fund interest dropped by 1 funds heading into Q3.

As you can see these stocks had an average of 54.25 hedge funds with bullish positions and the average amount invested in these stocks was $3815 million. That figure was $450 million in CHL’s case. The Boeing Company (NYSE:BA) is the most popular stock in this table. On the other hand Taiwan Semiconductor Mfg. Co. Ltd. (NYSE:TSM) is the least popular one with only 37 bullish hedge fund positions. Compared to these stocks China Mobile Limited (NYSE:CHL) is even less popular than TSM. Our calculations showed that top 15 most popular stocks among hedge funds returned 19.7% through March 15th and outperformed the S&P 500 ETF (SPY) by 6.6 percentage points. Hedge funds were also right about betting on CHL as the stock returned 14.5% and outperformed the market as well.

These Hedge Funds Were Right Betting On Corindus Vascular Robotics Inc (CVRS...
Monthly Newsletter Strategy
Download a free copy of our newsletter and see the details inside!
Hedge Fund Resource Center
Related News
Hedge Funds Are Betting On China Mobile Limited (CHL) 4 Bargain-Priced Dividend Stocks Near 52-Week Lows World’s 10 Largest Telecom Companies By Subscribers 10 Most Valuable Brands in China 11 Most Profitable Companies in China 10 Largest Telecom Companies in The World by Revenue How China Mobile Ltd. (ADR) (CHL) Stacks Up Against Similarly Valued Stocks Ten of the Most Common Addictions 13 African Countries with the Largest White Population in 2018 6 Causes of Human Trafficking in Africa, India, and US
Billionaire Hedge Funds