Chevron Corporation (CVX): Are Hedge Funds Right About This Stock?

We at Insider Monkey have gone over 700 13F filings that hedge funds and prominent investors are required to file by the SEC The 13F filings show the funds’ and investors’ portfolio positions as of September 30th. In this article, we look at what those funds think of Chevron Corporation (NYSE:CVX) based on that data.

Is Chevron Corporation (NYSE:CVX) ready to rally soon? The best stock pickers are becoming hopeful. The number of bullish hedge fund bets jumped by 12% in Q3, hitting a 3-year high. One of the 10 Biggest Companies That Drug Test (which doesn’t seem fair, because what else are you supposed to do when you’re stuck on an oil rig for weeks at a time), Chevron was owned by 56 hedge funds at the end of the third quarter. That didn’t qualify it as one of the 30 Most Popular Stocks Among Hedge Funds, but it did rank 7th among the 20 Dividend Stocks That Billionaires Are Piling On, being owned by billionaire dividend investor Ken Fisher among others.

According to most market participants, hedge funds are assumed to be worthless, old investment vehicles of years past. While there are greater than 8,000 funds in operation today, we choose to focus on the top tier of this group, about 700 funds. These hedge fund managers handle bulk of the smart money’s total asset base, and by tailing their first-class picks, Insider Monkey has formulated several investment strategies that have historically surpassed Mr. Market. Insider Monkey’s flagship hedge fund strategy defeated the S&P 500 index by 6 percentage points per year since its inception in May 2014 through early November 2018. We were able to generate large returns even by identifying short candidates. Our portfolio of short stocks lost 26.1% since February 2017 even though the market was up nearly 19% during the same period. We just shared a list of 11 short targets in our latest quarterly update.

How have hedgies been trading Chevron Corporation (NYSE:CVX)?

Heading into the fourth quarter of 2018, a total of 56 of the hedge funds tracked by Insider Monkey were long this stock, a 12% rise from one quarter earlier. By comparison, 48 hedge funds held shares or bullish call options in CVX heading into this year. With the smart money’s capital changing hands, there exists an “upper tier” of noteworthy hedge fund managers who were increasing their stakes substantially (or already accumulated large positions). 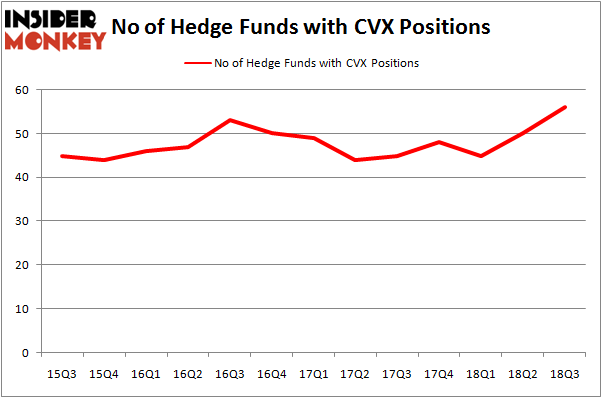 Among these funds, Fisher Asset Management held the most valuable stake in Chevron Corporation (NYSE:CVX), which was worth $564 million at the end of the third quarter. On the second spot was D E Shaw which amassed $349.4 million worth of shares. Moreover, Renaissance Technologies, Millennium Management, and Two Sigma Advisors were also bullish on Chevron Corporation (NYSE:CVX), allocating a large percentage of their portfolios to this stock.

With a general bullishness amongst the heavyweights, specific money managers were breaking ground themselves. Capital Growth Management, managed by Ken Heebner, initiated the biggest position in Chevron Corporation (NYSE:CVX). Capital Growth Management had $33 million invested in the company at the end of the quarter. Clint Carlson’s Carlson Capital also made a $21 million investment in the stock during the quarter. The following funds were also among the new CVX investors: Glenn Russell Dubin’s Highbridge Capital Management, David Costen Haley’s HBK Investments, and Joe DiMenna’s Zweig-Dimenna Associates

As you can see these stocks had an average of 52 hedge funds with bullish positions and the average amount invested in these stocks was $3.77 billion. That figure was $3.01 billion in CVX’s case. Cisco Systems, Inc. (NASDAQ:CSCO) is the most popular stock in this table. On the other hand Taiwan Semiconductor Mfg. Co. Ltd. (NYSE:TSM) is the least popular one with only 42 bullish hedge fund positions. Chevron Corporation (NYSE:CVX) is not the most popular stock in this group but hedge fund interest is still above average and growing quickly, which is a very positive signal.