Foot Locker, Inc. (NYSE:FL) and its associated stores are a common sight at American malls. The company, which is often the first stop for U.S. shoppers looking for athletic footwear and apparel, survived the recession and emerged far stronger than before – posting three straight years of consecutive earnings growth.

Yet the stock recently plunged over 7% after it reported fourth quarter earnings that didn’t quite satisfy Wall Street. Was this just a temporary slip, or has Foot Locker really lost its footing?
In addition to its namesake stores, Foot Locker also owns Champs Sports, Footaction USA and Eastbay/Footlocker.com.  Foot Locker operates 3,335 stores across 23 countries in North America, Europe, Australia and New Zealand. The company also has 42 franchised stores in the Middle East and South Korea.

For its fourth quarter, Foot Locker, Inc. (NYSE:FL) earned an adjusted $0.73 per share, representing a 28% increase from the previous year and matching analyst estimates.

The company’s revenue rose 14% to $1.71 billion, topping the consensus estimate of $1.69 billion. Sales growth outpaced merchandise inventory growth, which rose 9% to $1.7 million – a strong indicator that it is turning over its inventory at a healthy rate.

Same-store sales growth rose 7.9%, which came in far higher than its industry peers – many of whom were lucky to even post 5% same-store sales growth during the weaker-than-expected holiday shopping season. Industry rival Finish Line (NASDAQ:FINL) posted less than half of Foot Locker’s growth, at 3.6%.

Fundamentally, Foot Locker’s earnings appeared robust, and marked its 12th consecutive quarter of earnings and same-store sales growth. However, both its top and bottom line growth were aided by an extra week in the fourth quarter. Therefore, some investors were unimpressed that Foot Locker merely met expectations on profit while barely beating on sales. As a result, shares plunged more than 7% after the company released its earnings report on March 8.

During fiscal 2012, the company closed 119 stores, opened 85 new ones and remodeled or relocated 198 locations.

Remodeling its existing locations is a major part of Foot Locker’s primary strategy. As a result, the company expects to spend 35% more on capital expenditures in 2013. Throughout 2012, the company tested new prototype stores for nearly all its main stores, such as its namesake stores, Lady Foot Locker, Inc. (NYSE:FL) and Champs Sports.

These renovated stores are expected to complement new product lines from Nike (NYSE:NKE) and Adidas, which feature brighter colors and new technological enhancements. Demand for these new products has fueled the athletic footwear and apparel industry’s steep recovery since the end of the recession. Shares of Adidas and Nike have risen 250% and 170%, respectively, over the past four years.

The new Champs Sports stores have been remodeled drastically, with shoes moved to the center of the store while athletic apparel was moved to the walls, a reversal from its previous store model. The stores also feature a shop-in-shop concept, to promote a more “boutique-like” shopping experience. Several of the newly renovated locations also feature a Nike-exclusive concept store called “The Yardline”, which offers NFL-branded athletic gear.

Lady Foot Locker, the company’s worst performing brand, is being renovated as well. The company is attempting to address the fact that in athletic stores, men look for shoes first, while women start by focusing on apparel.

Therefore, Foot Locker is testing a new female-focused concept store called SIX:02 in three locations in Texas, Connecticut and New Jersey. SIX:02 offers more yoga and running gear than Lady Foot Locker, in a bid to emulate the success of Lululemon Athletica inc. (NASDAQ:LULU), which grew yoga apparel from a niche market into a mainstream one.

Foot Locker’s gradual store enhancements have boosted its average sales per square foot to approximately $400 – a 22% improvement over the past two years. By comparison, Finish Line finished fiscal 2012 with sales of $339 per square foot.

Looking ahead, Foot Locker, Inc. (NYSE:FL) forecasts 2013 earnings per share to rise by a “double-digit” percentage from 2012.  That is roughly in line with current estimates for earnings of $2.83 per share, a 15% increase.

Several analysts, such as Janney analyst Eric Tracy, expressed concerns regarding Foot Locker’s rising expenses. During the fourth quarter, SG&A (selling, general and administrative expenses) rose by 12% to $363 million from the prior year quarter, and as seen in the chart below, represent its highest levels in the past decade. 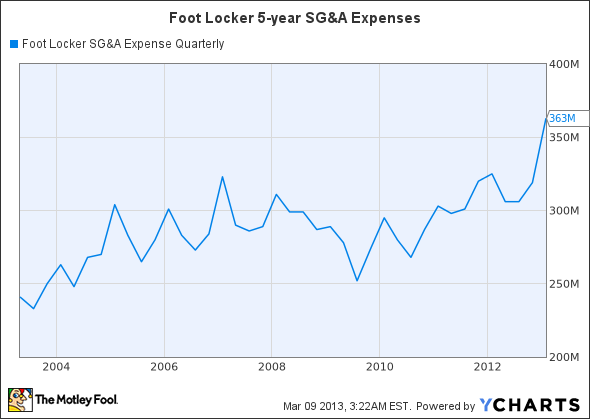 Foot Locker attributed these rising costs to more aggressive marketing and renovations – a strategy that the company does not expect to change in 2013.

However, should investors be worried? Let’s gauge how Foot Locker stacks up to its rival Finish Line, as well as two high momentum challengers in the market – Lululemon Athletica inc. (NASDAQ:LULU) and Under Armour Inc (NYSE:UA).