Published on October 19, 2016 at 7:01 am by Dividend Growth Investor in Dividend Stocks, News, Stock Analysis

Apple Inc. (NASDAQ:AAPL) designs, manufactures, and markets mobile communication and media devices, personal computers, and portable digital music players to consumers, small and mid-sized businesses, education, and enterprise and government customers worldwide. The company is the largest publicly traded company in the US by market capitalization. The company started paying a dividend in 2012, and has been raising it every year since then.

The company has done really well to its shareholders over the past decade, compounding at 27.62%/year for its shareholders. This performance is unlikely to be repeated over the next decade.

This was due to the fact that popularity for its products was exploding, and the company was unveiling new premium products to satisfy consumer needs. Examples include the iPhone and the iPad. All of this resulted in massive growth in earnings per share from 32 cents in 2006 to $9.22/share in 2015. The company is expected to earn $8.25/share in 2016 and $9.02/share in 2017. 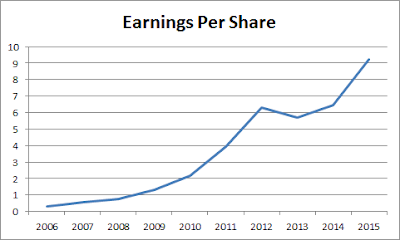 The company is also working its way through a massive multi-billion dollars authorized share buyback plan, which could shrink the number of shares outstanding by a quarter. As a result of many innovative products that Apple has introduced, it is sitting on close to $231 billion in cash and cash investments and long-term investments. This is offset by a long-term debt of 68.9 billion. The net effect of that represents close to 26% of Apple’s stock market capitalization.  The downside is that the vast majority of Apple’s cash hoard is stashed abroad. This is also due to the fact that a little less than 2/3rds of its sales are coming from outside the US. Due to the onerous nature of US tax laws, US corporations are taxed on their worldwide income. However, as long as they keep foreign earnings abroad, they do not need to pay corporate taxes on income, which can run up as high as 35%. This is why companies like Apple keep their earnings abroad, and instead access domestic debt markets as a way to use that liquidity that is trapped overseas. It is cheaper for Apple to take debt and pay 1%/year on it, rather than pay a 35% tax on net income earned overseas if it chooses to repatriate it to the US.

According to reports I have been reading, Apple now has a brand which is supposedly more valuable than that of Coca-Cola.

To be honest, I am not a big fan of Apple as an investment. The reason is that I guess I just cannot forecast whether earnings per share will be sustainable over next 5 – 10 years, or they will plateau and go down. The future value of the business 15 – 20 years from now will be largely driven out of the profits that will be generated in 15 – 20 years. Given the competitive nature of the technology industry, and the rapid product obsolescence, it is more difficult to determine the sustainability of Apple’s earnings.