Insider Monkey has processed numerous 13F filings of hedge funds and famous investors to create an extensive database of hedge fund holdings. The 13F filings show the hedge funds and investors’ positions as of the end of the third quarter. You can find write-ups about an individual hedge fund’s trades on numerous financial news websites. However, in this article we will take a look at their collective moves and analyze what the smart money thinks of Callaway Golf Company (NYSE:ELY) based on that data.

Callaway Golf Company (NYSE:ELY) investors should pay attention to an increase in hedge fund sentiment lately. Our calculations also showed that ELY isn’t among the 30 most popular stocks among hedge funds.

What does the smart money think about Callaway Golf Company (NYSE:ELY)?

At the end of the third quarter, a total of 27 of the hedge funds tracked by Insider Monkey were bullish on this stock, a change of 4% from the second quarter of 2018. Below, you can check out the change in hedge fund sentiment towards ELY over the last 13 quarters. So, let’s review which hedge funds were among the top holders of the stock and which hedge funds were making big moves. 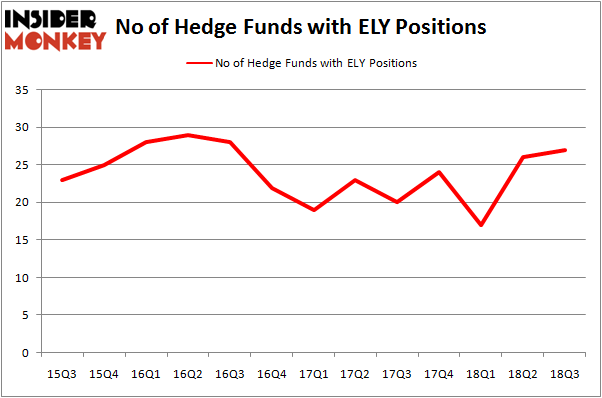 The largest stake in Callaway Golf Company (NYSE:ELY) was held by Renaissance Technologies, which reported holding $38.4 million worth of stock at the end of September. It was followed by Daruma Asset Management with a $38 million position. Other investors bullish on the company included Millennium Management, Driehaus Capital, and DC Capital Partners.

As one would reasonably expect, some big names have jumped into Callaway Golf Company (NYSE:ELY) headfirst. Sensato Capital Management, managed by Ernest Chow and Jonathan Howe, created the largest position in Callaway Golf Company (NYSE:ELY). Sensato Capital Management had $4.2 million invested in the company at the end of the quarter. Joel Greenblatt’s Gotham Asset Management also initiated a $1.2 million position during the quarter. The other funds with new positions in the stock are Guy Shahar’s DSAM Partners, Peter Algert and Kevin Coldiron’s Algert Coldiron Investors, and Mike Vranos’s Ellington.

View table here if you experience formatting issues.
As you can see these stocks had an average of 13 hedge funds with bullish positions and the average amount invested in these stocks was $148 million. That figure was $219 million in ELY’s case. Cavco Industries, Inc. (NASDAQ:CVCO) is the most popular stock in this table. On the other hand Transportadora de Gas del Sur SA (NYSE:TGS) is the least popular one with only 9 bullish hedge fund positions. Compared to these stocks Callaway Golf Company (NYSE:ELY) is more popular among hedge funds. Considering that hedge funds are fond of this stock in relation to its market cap peers, it may be a good idea to analyze it in detail and potentially include it in your portfolio.