Gaming stocks have had a fabulous start to 2013, with each of the top five publicly traded U.S. companies beating the S&P 500. Caesars Entertainment Corp (NASDAQ:CZR) is leading the pack after announcing the spinoff of its “growth assets,” and the four companies with operations in Macau have made slow and steady gains. 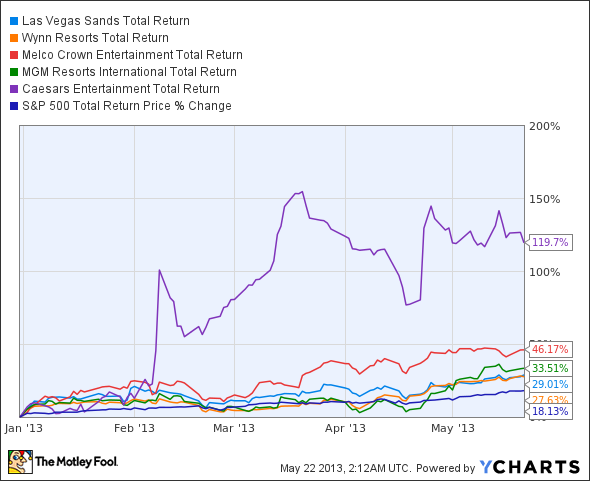 The steady economic recovery in the U.S. has helped MGM Resorts International (NYSE:MGM), Las Vegas Sands Corp. (NYSE:LVS), and Wynn Resorts, Limited (NASDAQ:WYNN) turn Las Vegas from a drag to a positive line on the income statement. But for each, Macau continues to be the most important.

In Macau, Cotai continues to take share, which is why MGM Resorts International (NYSE:MGM) and Wynn Resorts, Limited (NASDAQ:WYNN) are giving up share to Melco Crown Entertainment Ltd (ADR) (NASDAQ:MPEL) and Las Vegas Sands Corp. (NYSE:LVS). With all of these dynamics playing out, the big question now is: What’s the best bet for investors?

The best value in gaming
As always, gaming stocks aren’t just about whose revenues are growing, it’s about what you pay for those revenues. Based on the numbers below, Caesars Entertainment Corp (NASDAQ:CZR) is trading for a higher enterprise value/EBITDA multiple than MGM, which eliminates it right off the bat. Caesars Entertainment Corp (NASDAQ:CZR) is struggling in regional gaming and has $19 billion of debt to contend with, so I just don’t like the stock at this price.

Operationally speaking, Melco Crown Entertainment Ltd (ADR) (NASDAQ:MPEL) and Las Vegas Sands Corp. (NYSE:LVS) are in the best position, with a majority of revenue and EBITDA coming from Cotai. Both will continue to grow until MGM and Wynn are able to finish resorts that are slated for 2016.

The problem is that both Las Vegas Sands Corp. (NYSE:LVS) and Melco Crown trade for 40% premiums to Wynn and MGM, so investors have priced in a lot of growth for both companies.

To put these values into some context, if Wynn’s and MGM’s numbers didn’t change for the next three years (before expanding onto Cotai), Las Vegas Sands Corp. (NYSE:LVS) and Melco Crown would have to grow EBITDA at about 13% annually to reach a 10 EB/EBITDA ratio. This is very possible and even likely given the trends in gaming right now, but when we get three years down the road, the game changes.

The big difference in the four Macau companies is the scale of their growth opportunities. Las Vegas Sands already has five major resorts worldwide (not including Four Seasons Macau), and when the Parisian is built it will only increase the company’s percentage of major resorts by 20%. Wynn and Melco Crown have just two major resorts worldwide, and another will increase their total by 50%. So, it’s easy to see that the impact of one additional resort will be bigger for Melco Crown and Wynn.

MGM is also diluted because of its massive U.S. operations, but unlike the others it has a lot of financial leverage, goosing returns for shareholders. This is a lot to contend with, and there’s no clear-cut winner, unlike in years past.