BRP Inc. (DOOO): Are Hedge Funds Right About This Stock?

Hedge funds are known to underperform the bull markets but that’s not because they are bad at investing. Truth be told, most hedge fund managers and other smaller players within this industry are very smart and skilled investors. Of course, they may also make wrong bets in some instances, but no one knows what the future holds and how market participants will react to the bountiful news that floods in each day. Hedge funds underperform because they are hedged. The Standard and Poor’s 500 Index returned approximately 20% in the first 9 months of this year through September 30th (including dividend payments). Conversely, hedge funds’ top 20 large-cap stock picks generated a return of 24% during the same 9-month period. An average long/short hedge fund returned only a fraction of this due to the hedges they implement and the large fees they charge. Our research covering the last 18 years indicates that investors can outperform the market by imitating hedge funds’ consensus stock picks rather than directly investing in hedge funds. That’s why we believe it isn’t a waste of time to check out hedge fund sentiment before you invest in a stock like BRP Inc. (NASDAQ:DOOO).

BRP Inc. (NASDAQ:DOOO) shares haven’t seen a lot of action during the second quarter. Overall, hedge fund sentiment was unchanged. The stock was in 10 hedge funds’ portfolios at the end of the second quarter of 2019. At the end of this article we will also compare DOOO to other stocks including Alkermes Plc (NASDAQ:ALKS), Sabra Health Care REIT Inc (NASDAQ:SBRA), and UniFirst Corporation (NYSE:UNF) to get a better sense of its popularity. Our calculations also showed that BRP Inc isn’t among the 30 most popular stocks among hedge funds (view the video below).

According to most traders, hedge funds are viewed as underperforming, outdated financial tools of years past. While there are more than 8000 funds with their doors open today, Our researchers look at the elite of this club, approximately 750 funds. These investment experts control the lion’s share of the smart money’s total capital, and by monitoring their inimitable equity investments, Insider Monkey has revealed numerous investment strategies that have historically surpassed Mr. Market. Insider Monkey’s flagship hedge fund strategy outperformed the S&P 500 index by around 5 percentage points per year since its inception in May 2014. We were able to generate large returns even by identifying short candidates. Our portfolio of short stocks lost 25.7% since February 2017 (through September 30th) even though the market was up more than 33% during the same period. We just shared a list of 10 short targets in our latest quarterly update .

Unlike former hedge manager, Dr. Steve Sjuggerud, who is convinced Dow will soar past 40000, our long-short investment strategy doesn’t rely on bull markets to deliver double digit returns. We only rely on hedge fund buy/sell signals. We’re going to take a look at the new hedge fund action regarding BRP Inc. (NASDAQ:DOOO).

What does smart money think about BRP Inc. (NASDAQ:DOOO)?

Heading into the third quarter of 2019, a total of 10 of the hedge funds tracked by Insider Monkey were long this stock, a change of 0% from one quarter earlier. The graph below displays the number of hedge funds with bullish position in DOOO over the last 16 quarters. With the smart money’s capital changing hands, there exists a select group of key hedge fund managers who were boosting their holdings meaningfully (or already accumulated large positions). 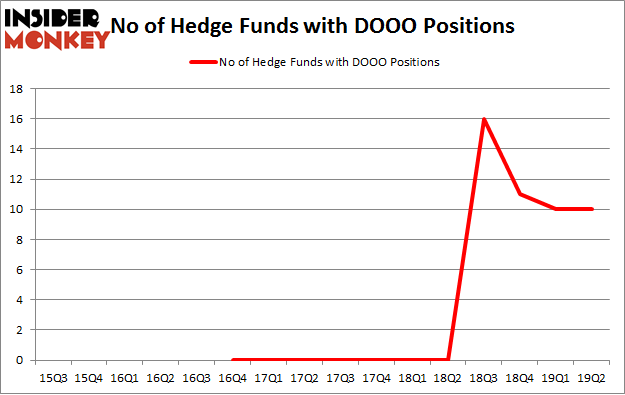 Among these funds, Arrowstreet Capital held the most valuable stake in BRP Inc. (NASDAQ:DOOO), which was worth $22.8 million at the end of the second quarter. On the second spot was Marshall Wace LLP which amassed $17.4 million worth of shares. Moreover, GLG Partners, D E Shaw, and Manatuck Hill Partners were also bullish on BRP Inc. (NASDAQ:DOOO), allocating a large percentage of their portfolios to this stock.

We view hedge fund activity in the stock unfavorable, but in this case there was only a single hedge fund selling its entire position: AQR Capital Management. One hedge fund selling its entire position doesn’t always imply a bearish intent. Theoretically a hedge fund may decide to sell a promising position in order to invest the proceeds in a more promising idea. However, we don’t think this is the case in this case because only one of the 800+ hedge funds tracked by Insider Monkey identified as a viable investment and initiated a position in the stock (that fund was Manatuck Hill Partners).

As you can see these stocks had an average of 22.25 hedge funds with bullish positions and the average amount invested in these stocks was $227 million. That figure was $73 million in DOOO’s case. BJ’s Wholesale Club Holdings, Inc. (NYSE:BJ) is the most popular stock in this table. On the other hand Sabra Health Care REIT Inc (NASDAQ:SBRA) is the least popular one with only 10 bullish hedge fund positions. Compared to these stocks BRP Inc. (NASDAQ:DOOO) is even less popular than SBRA. Hedge funds clearly dropped the ball on DOOO as the stock delivered strong returns, though hedge funds’ consensus picks still generated respectable returns. Our calculations showed that top 20 most popular stocks among hedge funds returned 24.4% in 2019 through September 30th and outperformed the S&P 500 ETF (SPY) by 4 percentage points. A small number of hedge funds were also right about betting on DOOO as the stock returned 8.9% during the third quarter and outperformed the market by an even larger margin.

Hedge Funds Have Never Been This Bullish On Glacier Bancorp, Inc. (GBCI)
Monthly Newsletter Strategy
Download a free copy of our newsletter and see the details inside!
Hedge Fund Resource Center
Related News
Did Hedge Funds Drop The Ball On BRP Inc. (DOOO) ? Here’s What Hedge Funds Think About BRP Inc. (DOOO) 11 Largest Auto Insurance Companies In The US In 2019 10 Poorest Cities in America in 2019 8 Lowest Tar and Nicotine Cigarette Brands in 2019
Billionaire Hedge Funds