Let’s be clear: Amplimmune is a far cry from Onyx from a development standpoint and won’t have anywhere near the same immediate impact. However, the company’s drug development platform specializes in treating the B7 pathway and, most importantly, the PD-1 pathway. Can this deal be bigger than Onyx in the long run?

PD-1: The buzz of ASCO
You may remember that one of the biggest stories at ASCO this year was the arrival of PD-1 cancer immunotherapies. The monoclonal antibodies remove a defense mechanism tumor cells use to hide from the immune system, which allow patients to fight cancer with better results in a shorter period of time. The class of drugs could be used in a wide-range of cancers — further enhancing their potential value for companies and their shareholders.

Bristol Myers Squibb Co. (NYSE:BMY) announced amazing data from its phase 1 trial of nivolumab in combination with its melanoma drug Yervoy in patients with advanced melanoma. The combination achieved a response rate of 53% with those patients achieving tumor shrinkage of more than 80% in just 12 weeks. A report released by GlobalData believes the combination therapy could generate $1.75 billion in revenue by 2022 from non-small cell lung cancer alone, assuming approval as a first-line and second-line treatment. That would have made up 10% of the company’s total 2012 sales.

Not to be outdone at ASCO, Merck & Co., Inc. (NYSE:MRK) presented data from its PD-1 drug, lambrolizumab, which achieved a response rate of 52%. Late-stage clinical trials are launching this quarter evaluating the drug in melanoma and non-small cell lung cancer. Despite the increased attention being paid to Bristol Myers Squibb Co. (NYSE:BMY)’s combination therapy, Merck & Co., Inc. (NYSE:MRK) did gain the coveted breakthrough therapy designation for its monotherapy. That means data from a 500 patient phase 2 trial could be enough to gain approval before results from late-stage trials roll in.

Roche Holding Ltd. (ADR) (OTCMKTS:RHHBY) is next on the list with its early stage drug candidate MPDL320A, although it targets only the PD-L1 protein. The company believes the drug could be safer than other PD-1 therapies being developed because it spares the PD-L2 receptor, which is found on healthy cells and may cause lung inflammation as a side effect. Roche Holding Ltd. (ADR) (OTCMKTS:RHHBY) seems to be in third place in the race thus far, but if advantages in selectivity pan out it could get the last laugh in the race to market a wildly successful PD-1 therapy. 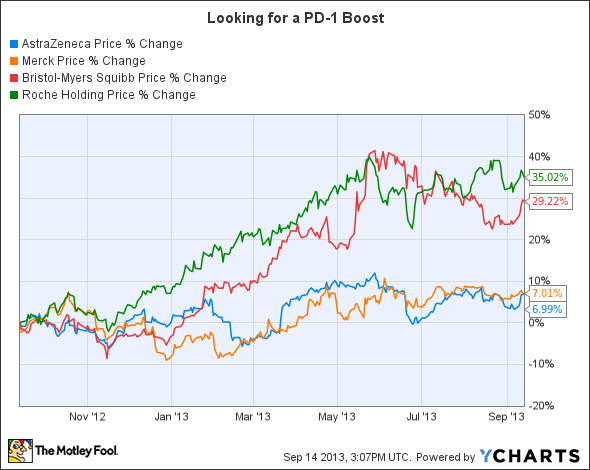 Although Bristol Myers Squibb Co. (NYSE:BMY) may have an advantage due to its combination with Yervoy, all trials conducted to date have been relatively small. For instance, Roche Holding Ltd. (ADR) (OTCMKTS:RHHBY) was just leaving phase 1 dosing trials this spring. Still, if larger trials give comparable data then PD-1 immunotherapies certainly look like the next blockbuster class of oncology drugs.

AstraZeneca enters the race
OK, so where am I going with this? Amplimmune’s IMT-C platform develops drugs that work in a very similar way to PD-1 drugs. In fact, its most-promising drug candidate, AMP-514, is a PD-1 monoclonal antibody that should have an investigational new drug application filed this year. Thanks to ASCO, all of the news surrounding the class of drugs revolves around oncology indications, but applications also include inflammatory diseases and chronic infections.