Is Brandywine Realty Trust (NYSE:BDN) undervalued? Prominent investors are betting on the stock. The number of bullish hedge fund positions rose by 2 recently. Our calculations also showed that bdn isn’t among the 30 most popular stocks among hedge funds.

What have hedge funds been doing with Brandywine Realty Trust (NYSE:BDN)?

Heading into the fourth quarter of 2018, a total of 15 of the hedge funds tracked by Insider Monkey were bullish on this stock, a change of 15% from one quarter earlier. On the other hand, there were a total of 12 hedge funds with a bullish position in BDN at the beginning of this year. With hedge funds’ sentiment swirling, there exists an “upper tier” of key hedge fund managers who were increasing their stakes significantly (or already accumulated large positions). 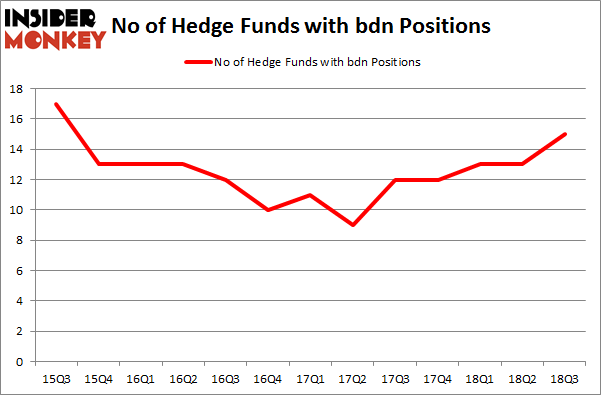 Among these funds, Citadel Investment Group held the most valuable stake in Brandywine Realty Trust (NYSE:BDN), which was worth $52.5 million at the end of the third quarter. On the second spot was Millennium Management which amassed $29.7 million worth of shares. Moreover, Balyasny Asset Management, Renaissance Technologies, and Two Sigma Advisors were also bullish on Brandywine Realty Trust (NYSE:BDN), allocating a large percentage of their portfolios to this stock.

As industrywide interest jumped, key hedge funds have jumped into Brandywine Realty Trust (NYSE:BDN) headfirst. Tudor Investment Corp, managed by Paul Tudor Jones, created the largest position in Brandywine Realty Trust (NYSE:BDN). Tudor Investment Corp had $0.6 million invested in the company at the end of the quarter. Paul Marshall and Ian Wace’s Marshall Wace LLP also made a $0.2 million investment in the stock during the quarter. The only other fund with a brand new BDN position is George Zweig, Shane Haas and Ravi Chander’s Signition LP.

As you can see these stocks had an average of 15.75 hedge funds with bullish positions and the average amount invested in these stocks was $203 million. That figure was $122 million in BDN’s case. Golar LNG Limited (NASDAQ:GLNG) is the most popular stock in this table. On the other hand Colony Credit Real Estate, Inc. (NYSE:CLNC) is the least popular one with only 4 bullish hedge fund positions. Brandywine Realty Trust (NYSE:BDN) is not the least popular stock in this group but hedge fund interest is still below average. This is a slightly negative signal and we’d rather spend our time researching stocks that hedge funds are piling on. In this regard GLNG might be a better candidate to consider a long position.