Eagle Capital Management is a New York based hedge fund that was founded in 1988 by Ravenel Boykin Curry III, father of the current partner of the fund, Ravenel Boykin Curry IV. Eagle Capital Management applies a bottom-up research-intensive approach and concentrates its efforts on finding undervalued companies. Boykin Curry IV, 45 years old, graduated from Yale University with a degree in Economics in 1988 and holds an MBA from Harvard Business School. Eagle Capital Management historically beats the S&P 500 and Russell 1000 Value Indexes. In 2010, Eagle returned 21%, whereas returns of S&P 500 and Russell 1000 were 15.1% and 15.5%, respectively. Over the past five years, Eagle’s return was 5.7%, vs. 2.4% for the S&P 500 index. Eagle generated a cumulative return of 2,031% since its inception where S&P 500 and Russell 1000 indices returned 634% and 687% respectively during the same time period.

Below are the most recent reported activities of Eagle Capital: 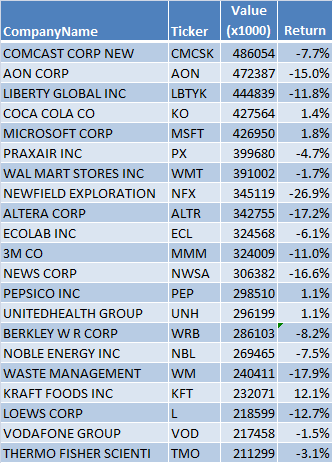 Eagle had $8.2 billion in its 13F portfolio on March 31. The above list represents more than 80% of Eagle’s holdings as of the end of March. These stocks lost 7.5% since the end of March, outperforming the S&P 500 index by 1.5 percentage points.

Eagle also held a positive view of WMT and increased its holdings by almost 20%, buying over a million shares. WMT lost almost 2% since March 31. Some other funds such as First Pacific Advisors and Elm Ridge Capital shared the same view and increased their WMT holdings as well. Berkshire Hathaway continued to hold over 39 million shares of WMT, valued at over $2 billion on March 31.

Another great pick for Eagle was probably Pepsi as it bought more than 4.5 million shares in the first quarter (Eagle held a little over 7K PEP holdings at the end of 4Q2010). PEP was almost like a new holding on Eagle’s portfolio. The stock gained 1.1% since the end of March. Patrick McCormack’s Tiger Consumer Management also initiated a brand new position in Pepsi during the first quarter.

Eagle’s worst bets in terms of percentage were WM, NWSA, and NFX. These stocks incurred double digit losses since the end of the first quarter. Eagle increased its holdings by 6% to 10% in each of these securities. We like Boykin Curry and keep tracking his stock picks and performance.