A whopping number of 13F filings filed with U.S. Securities and Exchange Commission has been processed by Insider Monkey so that individual investors can look at the overall hedge fund sentiment towards the stocks included in their watchlists. These freshly-submitted public filings disclose money managers’ equity positions as of the end of the three-month period that ended March 31st, so let’s proceed with the discussion of the hedge fund sentiment on Boyd Gaming Corporation (NYSE:BYD).

Is Boyd Gaming Corporation (NYSE:BYD) a bargain? Investors who are in the know were getting less optimistic. The number of bullish hedge fund bets shrunk by 6 recently. Boyd Gaming Corporation (NYSE:BYD) was in 22 hedge funds’ portfolios at the end of the first quarter of 2021. The all time high for this statistic is 34. Our calculations also showed that BYD isn’t among the 30 most popular stocks among hedge funds (click for Q1 rankings). There were 28 hedge funds in our database with BYD holdings at the end of December.

At Insider Monkey, we scour multiple sources to uncover the next great investment idea. For example, Chuck Schumer recently stated that marijuana legalization will be a Senate priority. So, we are checking out this under the radar stock that will benefit from this. We go through lists like the 10 best battery stocks to pick the next Tesla that will deliver a 10x return. Even though we recommend positions in only a tiny fraction of the companies we analyze, we check out as many stocks as we can. We read hedge fund investor letters and listen to stock pitches at hedge fund conferences. You can subscribe to our free daily newsletter on our homepage. Now let’s review the key hedge fund action regarding Boyd Gaming Corporation (NYSE:BYD).

Do Hedge Funds Think BYD Is A Good Stock To Buy Now?

At the end of the first quarter, a total of 22 of the hedge funds tracked by Insider Monkey were long this stock, a change of -21% from the previous quarter. On the other hand, there were a total of 26 hedge funds with a bullish position in BYD a year ago. With the smart money’s sentiment swirling, there exists an “upper tier” of key hedge fund managers who were increasing their stakes substantially (or already accumulated large positions). 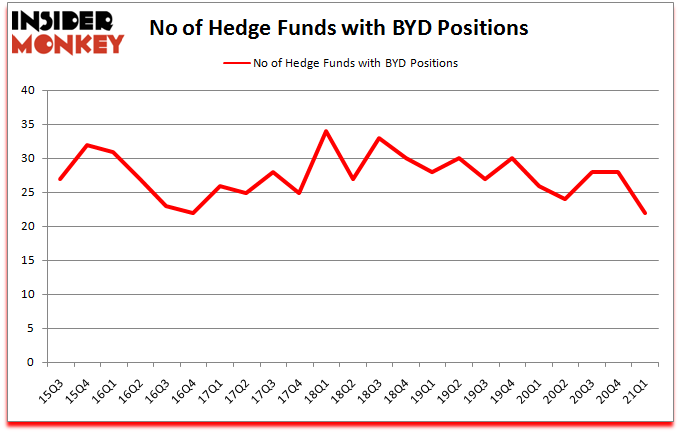 More specifically, Melvin Capital Management was the largest shareholder of Boyd Gaming Corporation (NYSE:BYD), with a stake worth $76.6 million reported as of the end of March. Trailing Melvin Capital Management was GAMCO Investors, which amassed a stake valued at $75.7 million. AQR Capital Management, Land & Buildings Investment Management, and Intrinsic Edge Capital were also very fond of the stock, becoming one of the largest hedge fund holders of the company. In terms of the portfolio weights assigned to each position Diametric Capital allocated the biggest weight to Boyd Gaming Corporation (NYSE:BYD), around 4.59% of its 13F portfolio. Land & Buildings Investment Management is also relatively very bullish on the stock, dishing out 4.28 percent of its 13F equity portfolio to BYD.

Because Boyd Gaming Corporation (NYSE:BYD) has experienced a decline in interest from the entirety of the hedge funds we track, it’s easy to see that there is a sect of hedge funds that decided to sell off their entire stakes by the end of the first quarter. Interestingly, Parag Vora’s HG Vora Capital Management dumped the biggest stake of the “upper crust” of funds watched by Insider Monkey, worth about $53.7 million in stock. Doug Silverman and Alexander Klabin’s fund, Senator Investment Group, also sold off its stock, about $30 million worth. These transactions are important to note, as total hedge fund interest fell by 6 funds by the end of the first quarter.

As you can see these stocks had an average of 21.9 hedge funds with bullish positions and the average amount invested in these stocks was $419 million. That figure was $299 million in BYD’s case. Shift4 Payments, Inc. (NYSE:FOUR) is the most popular stock in this table. On the other hand Plains All American Pipeline, L.P. (NASDAQ:PAA) is the least popular one with only 7 bullish hedge fund positions. Boyd Gaming Corporation (NYSE:BYD) is not the most popular stock in this group but hedge fund interest is still above average. Our overall hedge fund sentiment score for BYD is 47.3. Stocks with higher number of hedge fund positions relative to other stocks as well as relative to their historical range receive a higher sentiment score. This is a slightly positive signal but we’d rather spend our time researching stocks that hedge funds are piling on. Our calculations showed that top 5 most popular stocks among hedge funds returned 95.8% in 2019 and 2020, and outperformed the S&P 500 ETF (SPY) by 40 percentage points. These stocks gained 23.8% in 2021 through July 16th and beat the market again by 7.7 percentage points. Unfortunately BYD wasn’t nearly as popular as these 5 stocks and hedge funds that were betting on BYD were disappointed as the stock returned -9.8% since the end of March (through 7/16) and underperformed the market. If you are interested in investing in large cap stocks with huge upside potential, you should check out the top 5 most popular stocks among hedge funds as many of these stocks already outperformed the market since 2019.

Is BYD A Good Investment Right Now?Is BYD A Good Stock To Buy?NYSE:BYDSentiment Score Between 40 and 50Yahoo Finance