Boston Scientific Corporation (NYSE:BSX) has experienced an increase in activity from the world’s largest hedge funds in recent months. Our calculations also showed that BSX isn’t among the 30 most popular stocks among hedge funds.

At Q3’s end, a total of 45 of the hedge funds tracked by Insider Monkey held long positions in this stock, a change of 7% from one quarter earlier. By comparison, 47 hedge funds held shares or bullish call options in BSX heading into this year. With hedgies’ sentiment swirling, there exists an “upper tier” of key hedge fund managers who were boosting their holdings significantly (or already accumulated large positions). 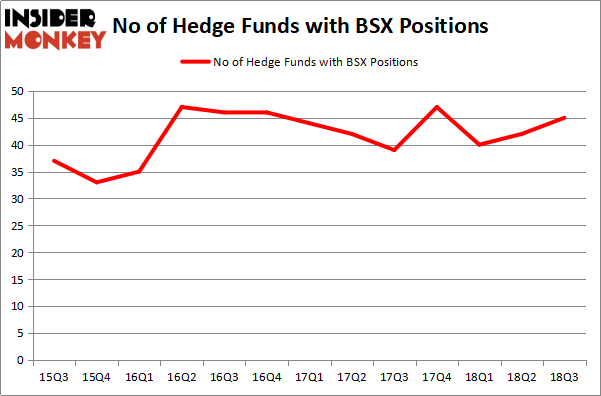 According to Insider Monkey’s hedge fund database, Ken Griffin’s Citadel Investment Group has the biggest position in Boston Scientific Corporation (NYSE:BSX), worth close to $314.4 million, comprising 0.1% of its total 13F portfolio. Coming in second is Samuel Isaly of OrbiMed Advisors, with a $302.8 million position; the fund has 3.6% of its 13F portfolio invested in the stock. Other members of the smart money with similar optimism consist of Doug Silverman and Alexander Klabin’s Senator Investment Group, Israel Englander’s Millennium Management and Phill Gross and Robert Atchinson’s Adage Capital Management.

As one would reasonably expect, key hedge funds were breaking ground themselves. Viking Global, managed by Andreas Halvorsen, initiated the biggest position in Boston Scientific Corporation (NYSE:BSX). Viking Global had $121.5 million invested in the company at the end of the quarter. Aaron Cowen’s Suvretta Capital Management also made a $91.5 million investment in the stock during the quarter. The following funds were also among the new BSX investors: Glenn Russell Dubin’s Highbridge Capital Management, Frank Brosens’s Taconic Capital, and Benjamin A. Smith’s Laurion Capital Management.

As you can see these stocks had an average of 23.25 hedge funds with bullish positions and the average amount invested in these stocks was $1.28 billion. That figure was $2.42 billion in BSX’s case. Micron Technology, Inc. (NASDAQ:MU) is the most popular stock in this table. On the other hand America Movil SAB de CV (NYSE:AMX) is the least popular one with only 10 bullish hedge fund positions. Boston Scientific Corporation (NYSE:BSX) is not the most popular stock in this group but hedge fund interest is still above average. This is a slightly positive signal but we’d rather spend our time researching stocks that hedge funds are piling on. In this regard MU might be a better candidate to consider a long position.