BlackLine, Inc. (BL): Are Hedge Funds Right About This Stock?

Is BlackLine, Inc. (NASDAQ:BL) a good investment right now? We check hedge fund and billionaire investor sentiment before delving into hours of research. Hedge funds spend millions of dollars on Ivy League graduates, expert networks, and get tips from industry insiders. They sometimes fail miserably but historically their consensus stock picks outperformed the market after adjusting for known risk factors.

Is BlackLine, Inc. (NASDAQ:BL) ready to rally soon? The best stock pickers are becoming less confident. The number of bullish hedge fund positions shrunk by 2 in recent months. Our calculations also showed that BL isn’t among the 30 most popular stocks among hedge funds. BL was in 13 hedge funds’ portfolios at the end of September. There were 15 hedge funds in our database with BL positions at the end of the previous quarter.

At Q3’s end, a total of 13 of the hedge funds tracked by Insider Monkey were long this stock, a change of -13% from the previous quarter. Below, you can check out the change in hedge fund sentiment towards BL over the last 13 quarters. With hedge funds’ positions undergoing their usual ebb and flow, there exists a select group of key hedge fund managers who were boosting their holdings significantly (or already accumulated large positions). 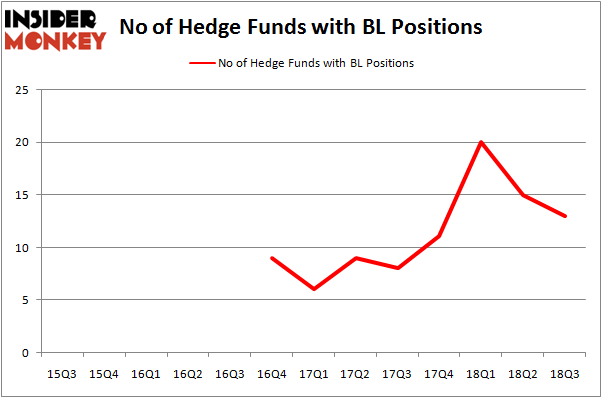 Seeing as BlackLine, Inc. (NASDAQ:BL) has faced a decline in interest from the smart money, it’s easy to see that there was a specific group of money managers who were dropping their positions entirely last quarter. Interestingly, Panayotis Takis Sparaggis’s Alkeon Capital Management dumped the largest stake of the 700 funds followed by Insider Monkey, totaling about $30.4 million in stock. Robert G. Moses’s fund, RGM Capital, also dumped its stock, about $22.1 million worth. These bearish behaviors are intriguing to say the least, as aggregate hedge fund interest was cut by 2 funds last quarter.

As you can see these stocks had an average of 18.75 hedge funds with bullish positions and the average amount invested in these stocks was $396 million. That figure was $275 million in BL’s case. Penn National Gaming, Inc (NASDAQ:PENN) is the most popular stock in this table. On the other hand Altera Corporation (NASDAQ:ALTR) is the least popular one with only 13 bullish hedge fund positions. Compared to these stocks BlackLine, Inc. (NASDAQ:BL) is even less popular than ALTR. Considering that hedge funds aren’t fond of this stock in relation to other companies analyzed in this article, it may be a good idea to analyze it in detail and understand why the smart money isn’t behind this stock. This isn’t necessarily bad news. Although it is possible that hedge funds may think the stock is overpriced and view the stock as a short candidate, they may not be very familiar with the bullish thesis. In either case more research is warranted.