How many of us as investors want to identify companies that are pioneers in their industry? Is it possible to find commonality across sectors, which factors make specific companies great and cause other companies to fail?

A technology company like Oracle Corporation (NASDAQ:ORCL), which despite its tremendous size, continues to innovate and deliver value for shareholders by making smart bolt-on acquisitions. Or consider multimedia and entertainment giant The Walt Disney Company (NYSE:DIS), led by the visionary CEO Bob Iger, which is becoming the only game in town for digital content. Disney’s valuable ABC Television and ESPN lines are unequaled and generate more than half of the company’s profit for shareholders. And while many may not like Amazon.com, Inc. (NASDAQ:AMZN) as a company for understandable reasons, the stock has consistently performed well because Amazon is able to undercut competition and provide the lowest prices to its customers (Reference my articles on The Walt Disney Company and Amazon.com).

Each of these companies has at least one factor in common: a sustainable competitive advantage.

Let’s apply the same principle of competitive advantage to a market sector that investors often stray away from: the pharmaceutical industry. Consider the case of BioMarin Pharmaceutical Inc. (NASDAQ:BMRN), which reached an all-time high of $56.71 on Feb. 1. The company develops treatments for rare diseases and owns the rights to four market-leading drugs, three of which are the only FDA-approved medications in their respective categories. 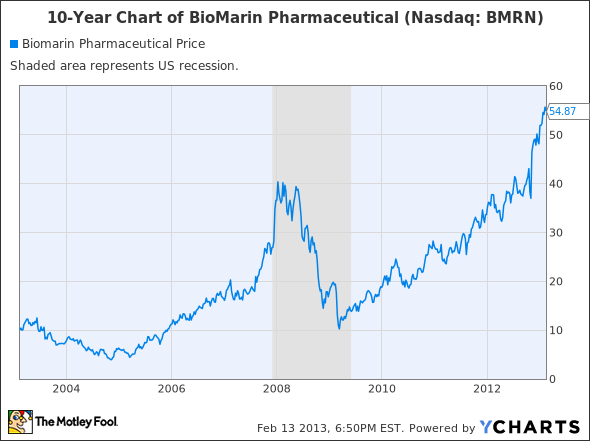 BioMarin Pharmaceutical has risen 14% year-to-date and 51% in the last 12 months. In light of the stock’s recent run, here are four reasons I believe this breakout stock is headed significantly higher:

BioMarin gives notable mention on its investor relations website that it has brought three drugs to market in a 12-year period — an incredible feat for any company in the pharmaceutical industry. The company’s fourth listed drug, Firdapse, is only approved in the European Union and has yet to receive FDA approval.

The mean (average) price target on BioMarin is $58.11, while the highest target on Wall Street currently stands at $70.