The 700+ hedge funds and famous money managers tracked by Insider Monkey have already compiled and submitted their 13F filings for the third quarter, which unveil their equity positions as of September 30. We went through these filings, fixed typos and other more significant errors and identified the changes in hedge fund portfolios. Our extensive review of these public filings is finally over, so this article is set to reveal the smart money sentiment towards BioMarin Pharmaceutical Inc. (NASDAQ:BMRN).

BioMarin Pharmaceutical Inc. (NASDAQ:BMRN) shares haven’t seen a lot of action during the third quarter. Overall, hedge fund sentiment was unchanged. The stock was in 45 hedge funds’ portfolios at the end of September. At the end of this article we will also compare BMRN to other stocks including Lincoln National Corporation (NYSE:LNC), Masco Corporation (NYSE:MAS), and American Airlines Group Inc (NASDAQ:AAL) to get a better sense of its popularity.

Unlike the largest US hedge funds that are convinced Dow will soar past 40,000 or the world’s most bearish hedge fund that’s more convinced than ever that a crash is coming, our long-short investment strategy doesn’t rely on bull or bear markets to deliver double digit returns. We only rely on the best performing hedge funds‘ buy/sell signals. Let’s view the key hedge fund action surrounding BioMarin Pharmaceutical Inc. (NASDAQ:BMRN).

At Q3’s end, a total of 45 of the hedge funds tracked by Insider Monkey were long this stock, a change of 0% from the previous quarter. The graph below displays the number of hedge funds with bullish position in BMRN over the last 17 quarters. With hedgies’ capital changing hands, there exists a select group of key hedge fund managers who were increasing their holdings meaningfully (or already accumulated large positions). 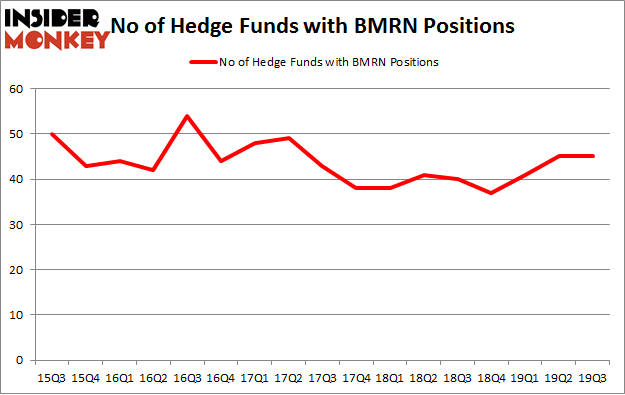 According to Insider Monkey’s hedge fund database, Julian Baker and Felix Baker’s Baker Bros. Advisors has the number one position in BioMarin Pharmaceutical Inc. (NASDAQ:BMRN), worth close to $511.5 million, amounting to 3.5% of its total 13F portfolio. Coming in second is Viking Global, managed by Andreas Halvorsen, which holds a $206.1 million position; the fund has 1.1% of its 13F portfolio invested in the stock. Remaining professional money managers with similar optimism include Behzad Aghazadeh’s venBio Select Advisor, William Leland Edwards’s Palo Alto Investors and Christopher James’s Partner Fund Management. In terms of the portfolio weights assigned to each position Palo Alto Investors allocated the biggest weight to BioMarin Pharmaceutical Inc. (NASDAQ:BMRN), around 9.92% of its portfolio. Copernicus Capital Management is also relatively very bullish on the stock, designating 8.53 percent of its 13F equity portfolio to BMRN.

Judging by the fact that BioMarin Pharmaceutical Inc. (NASDAQ:BMRN) has witnessed declining sentiment from hedge fund managers, logic holds that there were a few fund managers who sold off their entire stakes last quarter. It’s worth mentioning that Jacob Doft’s Highline Capital Management dumped the biggest investment of all the hedgies tracked by Insider Monkey, valued at close to $52 million in stock, and Peter Muller’s PDT Partners was right behind this move, as the fund cut about $25.6 million worth. These transactions are important to note, as aggregate hedge fund interest stayed the same (this is a bearish signal in our experience).

As you can see these stocks had an average of 37.75 hedge funds with bullish positions and the average amount invested in these stocks was $1203 million. That figure was $1622 million in BMRN’s case. Masco Corporation (NYSE:MAS) is the most popular stock in this table. On the other hand Lyft, Inc. (NASDAQ:LYFT) is the least popular one with only 33 bullish hedge fund positions. BioMarin Pharmaceutical Inc. (NASDAQ:BMRN) is not the most popular stock in this group but hedge fund interest is still above average. Our calculations showed that top 20 most popular stocks among hedge funds returned 34.7% in 2019 through November 22nd and outperformed the S&P 500 ETF (SPY) by 8.5 percentage points. Hedge funds were also right about betting on BMRN as the stock returned 15.4% during the fourth quarter (through 11/22) and outperformed the market. Hedge funds were rewarded for their relative bullishness.