Steve Cohen and SAC Capital are getting nutritious, in the sense that the billionaire dollar hedge fund has upped its stake by over thirty times what it owned at the end of the fourth quarter in the vitamin and supplement retailer, GNC Holdings Inc (NYSE:GNC) . SAC Capital now owns 5.195 million shares, or 5.2% of GNC’s outstanding shares. But, should investors follow Cohen’s lead?

The stock is up 150% since its early 2011 IPO, and the stock now trades near its all-time high of $42 per share, but I still believe there could be room for the nutrition company to go higher. 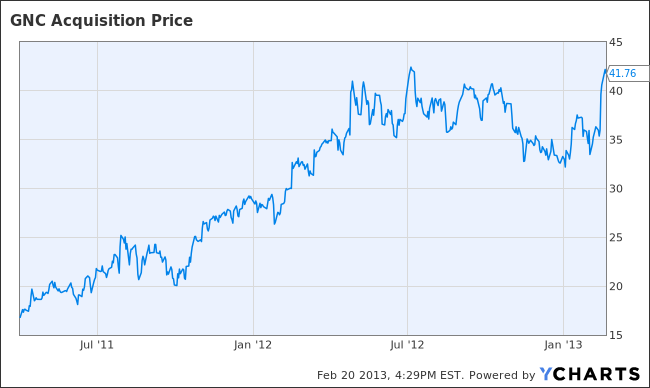 Why do should we care about what SAC Capital is doing? Over the last twenty plus years, Cohen’s SAC Capital has averaged returns of 30 percent. Cohen founded SAC Capital in 1992, and utilizes fundamental and quantitative analysis. SAC has around $14 billion in assets under management, with Cohen’s estimated net worth is upwards of $8 billion (check out Cohen’s latest picks).

Fellow nutrition retail store, and major competitor, Vitamin Shoppe Inc (NYSE:VSI)  has also seen stellar growth in its share price, a steady up and to the right trend. Vitamin is up over 250% since its late 2009 IPO… 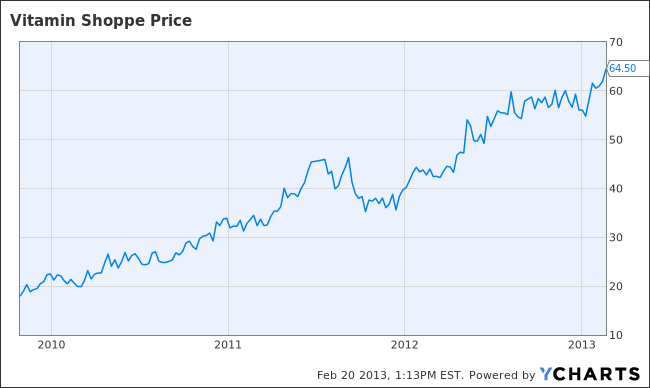 Vitamin Shoppe is expected to move even higher, with JPMorgan recently upping its price target to $73, compared to the $64.50 it currently trades at. Before that, investment firm Piper Jaffray upped its target price to $68.

GNC, and the industry, have been treated nicely thanks to a consumer shift toward a more health conscience lifestyle. Part of the previous headwinds for the vitamin industry was poor employment and tight consumer spending. However, as employment rises, this should help boost consumer spending, where Standard and Poor’s expects spending to be up 2.7% in 2013, after the projected 1.9% in 2012.

The vitamin market is rather niche, but a sizable market nonetheless, estimated to be a $29 billion industry, with GNC owning about 8% of the market, and Vitamin Shoppe owning 3.2%. Other competitors includes the likes of Herbalife Ltd. (NYSE:HLF)  , which has been in the news of late as billionaires Bill Ackman and Carl Icahn are publicly battling each other, where Ackman is short the stock and Icahn is on the long side (check out all of Icahn’s longs).

Herbalife’s recent quarterly results were positive for investors on the long side. Earnings beat estimates, with EPS of $1.05, where the consensus was $1.03. Despite this, I still remain cautious about the business, with respects to distribution networks and sales mix. As far as how Herbalife stacks up to GNC, Herbalife does not have any retail outlets or stores, but only has a number of “nutrition clubs.” These places allow people to join the ‘club’ for a membership fee, where they can then get together, hang out and drink free shakes.

Boding well for GNC includes the fact that the company has expanded beyond its own distribution methods, making strategic partnerships with Wal-Mart to sell some of its products within the retail giant’s stores. Whereas, Vitamin Shoppe has over 500 retail stores, and GNC now has over 6,000.