Like everyone else, elite investors make mistakes. Some of their top consensus picks, such as Amazon, Facebook and Alibaba, have not done well in October due to various reasons. Nevertheless, the data show elite investors’ consensus picks have done well on average over the long-term. The top 25 S&P 500 stocks among hedge funds at the end of June 2016 lost an average of 8.8% through October 26th whereas the average stock in the S&P 500 Index lost 9.5% during the same period. Because their consensus picks have done well, we pay attention to what elite funds think before doing extensive research on a stock. In this article, we take a closer look at Taiwan Semiconductor Mfg. Co. Ltd. (ADR) (NYSE:TSM) from the perspective of those elite funds.

There was a slight dip in hedge fund ownership of Taiwan Semiconductor Mfg. Co. Ltd. (ADR) (NYSE:TSM) during Q2 but they remained fairly bullish on the stock collectively. 34 funds tracked by our database were long the stock on June 30, including Fisher Investments, which has owned the stock since 2003 and has only grown more bullish on it over the years since. It ranked 8th on our list of Billionaire Ken Fisher’s Top Stock Picks Heading Into 2019, as Fisher Investments owned over 35 million TSM shares. Those shares have quadrupled in value since Fisher Investments first opened its position.

To most market participants, hedge funds are seen as worthless, outdated investment tools of years past. While there are greater than 8,000 funds trading at present, our researchers choose to focus on the upper echelon of this group, around 700 funds. It is estimated that this group of investors oversee most of the smart money’s total asset base, and by keeping an eye on their first-class investments, Insider Monkey has spotted many investment strategies that have historically outpaced the market. Insider Monkey’s small-cap hedge fund strategy outstripped the S&P 500 index by 12 percentage points annually for a decade in their back tests. 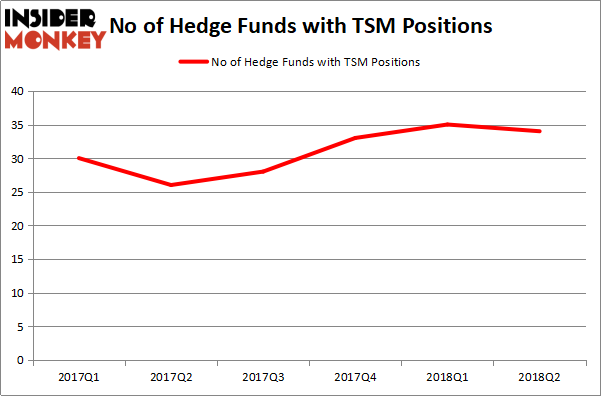 The largest stake in Taiwan Semiconductor Mfg. Co. Ltd. (ADR) (NYSE:TSM) was held by Ken Fisher’s Fisher Asset Management, which reported holding $1.25 billion worth of stock at the end of June. It was followed by Lansdowne Partners with a $779.1 million position. Other investors bullish on the company included Sloane Robinson Investment Management, Intermede Investment Partners, and Driehaus Capital.

Due to the fact that Taiwan Semiconductor Mfg. Co. Ltd. (ADR) (NYSE:TSM) has faced bearish sentiment from the smart money, it’s easy to see that there is a sect of money managers who were dropping their positions entirely by the end of the second quarter. It’s worth mentioning that Stephen Mandel’s Lone Pine Capital sold off the biggest stake of all the hedgies followed by Insider Monkey, valued at close to $540.4 million in stock. Panayotis Takis Sparaggis’ fund, Alkeon Capital Management, also dumped its stock, about $28.4 million worth.

As you can see these stocks had an average of 21 hedge funds with bullish positions and the average amount invested in these stocks was $5.38 billion. That figure was $4.13 billion in TSM’s case. The Coca-Cola Company (NYSE:KO) is the most popular stock in this table. On the other hand HSBC Holdings plc (ADR) (NYSE:HSBC) is the least popular one with only 7 bullish hedge fund positions. Taiwan Semiconductor Mfg. Co. Ltd. (ADR) (NYSE:TSM) is not the most popular stock in this group but hedge fund interest is still above average. This is a slightly positive signal but we’d rather spend our time researching stocks that hedge funds are piling on. In this regard KO might be a better candidate to consider a long position.