Individual investors do not usually have the necessary resources to properly research an investment opportunity. As a result, most investors pick their illusory “winners” by making a superficial analysis that leads to poor returns on aggregate. Since stock returns aren’t usually evenly distributed and index returns are more affected by a few outlier stocks (i.e. the FAANG stocks dominating and driving the S&P 500 Index’s returns in recent years), more than 50% of stocks in the S&P 500 underperform the benchmark. Hence, if you randomly pick a stock, there is a greater than 50% chance that you’ll fail to beat the market. At the same time, the 30 most favored S&P 500 stocks by the hedge funds monitored by Insider Monkey generated a return of 15.1% over the last 12 months (vs. a 5.6% gain for the SPY), with 53% of these stocks outperforming the benchmark. Hedge funds do make some bad bets but piggybacking their moves can beat the broader market on average. That’s why we are going to go over recent hedge fund activity in Flextronics International Ltd. (NASDAQ:FLEX).

Flextronics shares had fallen by over 20% by the midpoint of this year and there was a great deal of turnover in the ownership of the stock in Q2 among hedge funds. The stock’s April crash was seen as a buying opportunity by billionaire hedge funds like Jim Simons’ Renaissance Technologies, Paul Tudor Jones’ Tudor Investment and Rob Citrone’s Discovery Capital, all of which bought shares. In the case of Citrone’s fund, it loaded up on 2.64 million shares in Q2 to give it over 6.02 million shares. Another large share price decline in September also lead to the first insider purchase of the company’s shares in four years, which ranked 18th on our list of The 25 Biggest Insider Purchases in October. 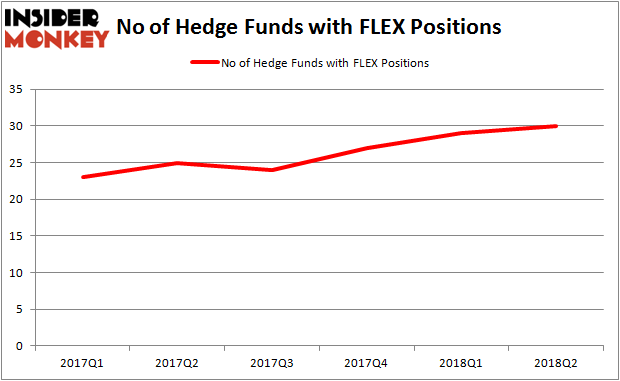 Of the funds tracked by Insider Monkey, Glenview Capital, managed by Larry Robbins, holds the biggest position in Flextronics International Ltd. (NASDAQ:FLEX). Glenview Capital has a $466.6 million position in the stock, comprising 3.2% of its 13F portfolio. Coming in second is AQR Capital Management, managed by Cliff Asness, which holds a $101.3 million position; 0.1% of its 13F portfolio is allocated to the stock. Other professional money managers that hold long positions consist of Rob Citrone’s Discovery Capital Management, Arnaud Ajdler’s Engine Capital and Gary Claar’s Claar Advisors.

As one would reasonably expect, key hedge funds have jumped into Flextronics International Ltd. (NASDAQ:FLEX) headfirst. Engine Capital, managed by Arnaud Ajdler, established the biggest position in Flextronics International Ltd. (NASDAQ:FLEX). Engine Capital had $6.5 million invested in the company at the end of the quarter. Marc Majzner’s Clearline Capital also initiated a $4.7 million position during the quarter. The other funds with new positions in the stock include Simon Sadler’s Segantii Capital and Charles Davidson and Joseph Jacobs’ Wexford Capital.

As you can see these stocks had an average of 23 hedge funds with bullish positions and the average amount invested in these stocks was $1.06 billion, the vast majority of which is invested in Axalta. That figure was $1.04 billion in FLEX’s case. Axalta is the most popular stock in this table, while MarketAxess brings up the rear, convincing only 11 hedge funds to own its shares. Compared to these stocks Flextronics is far more popular than all but Axalta. Considering that hedge funds are fond of this stock in relation to its market cap peers and insiders are also convinced that it’s poised for a rebound, it may be a good idea to analyze it in detail and consider an investment.