There are several ways to beat the market, and investing in small cap stocks has historically been one of them. We like to improve the odds of beating the market further by examining what famous hedge fund operators such as Carl Icahn and Cliff Asness think. Those hedge fund operators make billions of dollars each year by hiring the best and the brightest to do research on stocks, including small-cap stocks that big brokerage houses simply don’t cover. Because of Carl Icahn and other elite funds’ exemplary historical records, we pay attention to their small-cap picks. In this article, we use hedge fund filing data to analyze PolyOne Corporation (NYSE:POL).

Several hedge funds decided to sell off their PolyOne Corporation (NYSE:POL) shares in Q2, including Arrowstreet Capital and PEAK6 Capital Management, as the number of hedge fund shareholders dropped by three to 15. Billionaire Cliff Asness was buying PolyOne shares during Q2, as AQR Capital Management added just under 100,000 more to its position, raising it to 667,370 shares. PolyOne shares were driven down in October, losing well over 20% of their value, setting the company’s insiders off on a buying spree. Within a four day span in late October, four different PolyOne insiders had bought up some of the discounted shares, landing the company on our list of The 25 Biggest Insider Purchases in October.

In today’s marketplace there are a large number of methods shareholders put to use to evaluate publicly traded companies. A pair of the best methods are hedge fund and insider trading signals. We have shown that, historically, those who follow the best picks of the top fund managers can outperform the S&P 500 by a healthy amount (see the details here).

How have hedgies been trading PolyOne Corporation (NYSE:POL)?

At the end of the second quarter, a total of 15 of the hedge funds tracked by Insider Monkey were bullish on this stock, a 17% decline from the previous quarter. The graph below displays the number of hedge funds with long positions in POL over the last 6 quarters. After a jump in Q4 2017, hedge fund ownership has trended down over the past two quarters. With hedgies’ positions undergoing their usual ebb and flow, there exists a select group of noteworthy hedge fund managers who were increasing their holdings substantially (or already accumulated large positions). 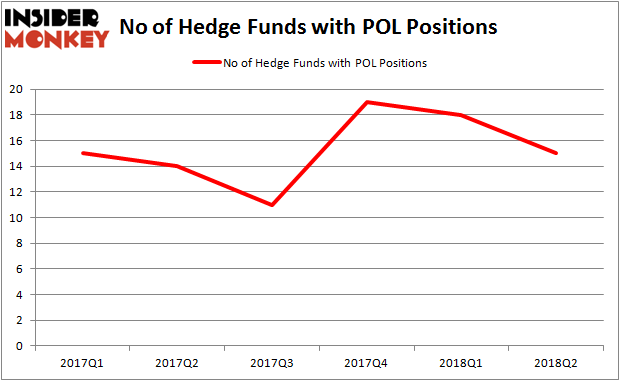 When looking at the institutional investors followed by Insider Monkey, AQR Capital Management, managed by Cliff Asness, holds the number one position in PolyOne Corporation (NYSE:POL) with a $28.8 million position in the stock. The second-largest stake is held by Jim Simons of Renaissance Technologies, with a $12 million position. Other hedge funds with long positions included Peter Muller’s PDT Partners, Joel Greenblatt’s Gotham Asset Management and Andrew Feldstein and Stephen Siderow’s Blue Mountain Capital.

Because PolyOne Corporation (NYSE:POL) has experienced bearish sentiment from the aggregate hedge fund industry, we can see that there is a sect of funds that elected to cut their entire stakes heading into Q3. It’s worth mentioning that Peter Rathjens, Bruce Clarke and John Campbell’s Arrowstreet Capital said goodbye to the biggest investment of the “upper crust” of funds followed by Insider Monkey, worth an estimated $3.3 million in stock. Mike Vranos’ fund, Ellington, also sold off its $884,000 position. These transactions are important to note, as total hedge fund interest dropped by three funds heading into Q3.

As you can see these stocks had an average of 21 hedge funds with bullish positions and the average amount invested in these stocks was $415 million. That figure was $71 million in POL’s case. Spirit Realty Capital Inc (NYSE:SRC) is the most popular stock in this table. On the other hand First Financial Bankshares Inc (NASDAQ:FFIN) is the least popular one with only six bullish hedge fund positions. PolyOne Corporation (NYSE:POL) is not the least popular stock in this group but hedge fund interest is still below average. This is a slightly negative signal and we’d rather spend our time researching stocks that hedge funds are piling on. In this regard Spirit Realty might be a better candidate to consider a long position in.