Becton, Dickinson and Company (BDX): Are Hedge Funds Right About This Stock?

Is Becton, Dickinson and Company (NYSE:BDX) going to take off soon? The smart money is turning bullish. The number of bullish hedge fund bets rose by 7 recently. Our calculations also showed that BDX isn’t among the 30 most popular stocks among hedge funds. BDX was in 41 hedge funds’ portfolios at the end of the third quarter of 2018. There were 34 hedge funds in our database with BDX positions at the end of the previous quarter.

Today there are many formulas shareholders use to assess stocks. Two of the most innovative formulas are hedge fund and insider trading sentiment. Our experts have shown that, historically, those who follow the top picks of the elite fund managers can beat the market by a very impressive margin (see the details here).

We’re going to check out the recent hedge fund action regarding Becton, Dickinson and Company (NYSE:BDX).

What have hedge funds been doing with Becton, Dickinson and Company (NYSE:BDX)?

At Q3’s end, a total of 41 of the hedge funds tracked by Insider Monkey were bullish on this stock, a change of 21% from the second quarter of 2018. On the other hand, there were a total of 52 hedge funds with a bullish position in BDX at the beginning of this year. With hedgies’ capital changing hands, there exists a few key hedge fund managers who were boosting their holdings meaningfully (or already accumulated large positions). 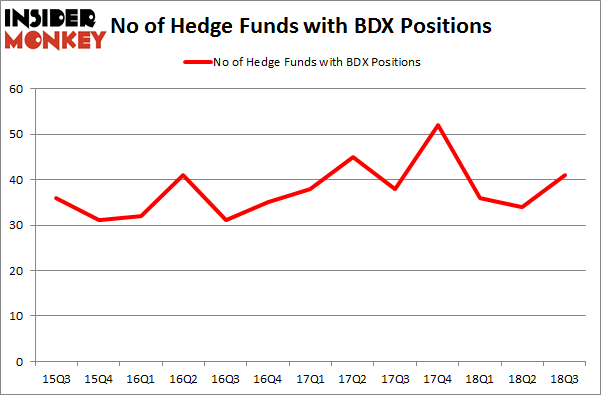 As you can see these stocks had an average of 24.75 hedge funds with bullish positions and the average amount invested in these stocks was $5.61 billion. That figure was $1.25 billion in BDX’s case. The TJX Companies, Inc. (NYSE:TJX) is the most popular stock in this table. On the other hand Westpac Banking Corporation (NYSE:WBK) is the least popular one with only 6 bullish hedge fund positions. Becton, Dickinson and Company (NYSE:BDX) is not the most popular stock in this group but hedge fund interest is still above average. This is a slightly positive signal but we’d rather spend our time researching stocks that hedge funds are piling on. In this regard TJX might be a better candidate to consider a long position.