The U.S. labor market has steadily recovered over the past three and a half years, with the unemployment rate declining from 10% at the end of 2009 to 7.6% in June. With more people getting back to work, human resource departments are processing more employee data and paychecks than ever before. Therefore, investors should pay attention to an often overlooked industry that deals with human resources and company payrolls.

Major players in this sector include Paychex, Inc. (NASDAQ:PAYX), Automatic Data Processing (NASDAQ:ADP) and Intuit Inc. (NASDAQ:INTU). Each of these companies focuses on different outsourcing needs for small and large businesses. Let’s take a look at how each has fared over the past few years.

Paychex was founded over four decades ago by CEO Tom Golisano, who recognized an untapped market in outsourced payroll services for small businesses. At the time, Golisano was employed for a larger regional payroll processor which only catered to larger businesses.

Despite his previous employer’s doubts, Golisano’s little business idea paid off. Since Paychex’s market debut in 1983, its shares have risen over 17,000%, and the company now generates over $2 billion in annual revenue. Today, Paychex not only offers payroll services, but also services for Time and Labor Management, HR Administration & Compliance, 401 (k) plans, and employee health insurance.

Although Paychex, Inc. (NASDAQ:PAYX) has risen more than 16% over the past twelve months, the stock recently tumbled after its fourth quarter profit and revenue missed analyst estimates. Paychex reported flat earnings growth of $0.34 per share, or $123.5 million, as its revenue grew 6.1% to $551.5 million. Analysts had expected the company to earn $0.37 per share on revenue of $588.0 million.

Paychek’s Payroll Service segment, its larger business, reported 3.5% top-line growth to $382.6 million, while its smaller HR segment reported 12.6% growth to $192.7 million. The company’s view for fiscal 2014 was roughly the same, calling for 3% to 4% growth in the Payroll segment and 9% to 10% growth in the HR segment. 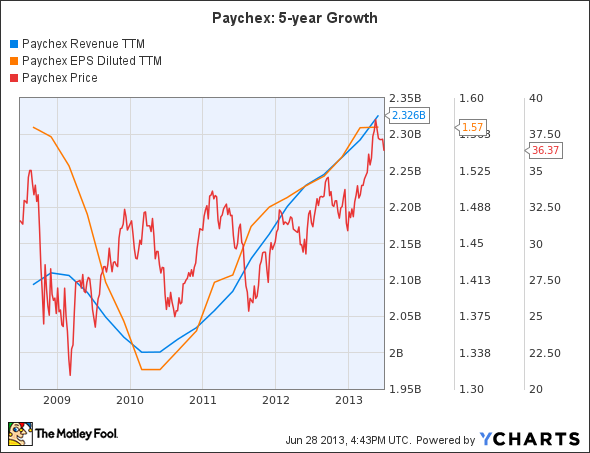 Paychex has stable top and bottom-line growth, along with a hefty 3.6% dividend, but a 5% increase in expenses last quarter caused some concerns. This was primarily caused by a rise in SG&A (selling, general and administrative) expenses incurred during the quarter for investments in product development and new technology.

A look at Automatic Data Processing (NASDAQ:ADP), which offers similar services to larger companies, also reveals similar trends. Last quarter, the company reported 6% year-on-year profit growth and a 7% gain in revenue to $3.1 billion. Unlike Paychex, however, ADP beat analyst estimates on both the top and bottom lines.

Automatic Data Processing (NASDAQ:ADP) was founded in 1949 and went public in 1978. Its business model is a classic example of the “old way” of outsourcing payroll and HR services prior to Paychex’s arrival. Its business is split into Employer Services (which includes payroll services), PEO (professional employer organization) Services, and Dealer Services (computing services for automobile and heavy equipment dealers).

Employer Services, which comprise the bulk of the company’s top line, reported 6% organic growth to $2.21 billion. For its PEO Services, Automatic Data Processing (NASDAQ:ADP) jointly hires a client company’s employees for tax and insurance purposes, then designates them to perform a multitude of outsourced tasks. This segment reported a 10% increase in revenue to $565.5 million. Its Dealer Services revenue also rose 8% to $460.5 million, as auto and equipment sales rose in the United States. 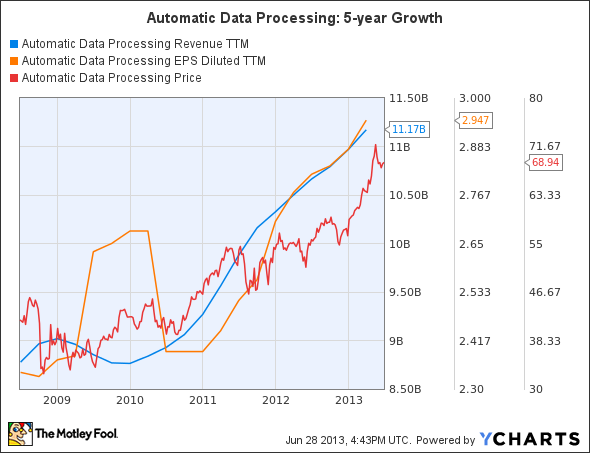 Automatic Data Processing (NASDAQ:ADP) has grown its top and bottom lines much faster than Paychex over the past three years, primarily due to its client base of larger companies, which were able to continue hiring as smaller businesses floundered. However, ADP’s total expenses rose 7.2%, due to higher operating costs, SG&A expenses and systems development & programming costs.

Buy Intuit Inc. (INTU) As Increased Revenue Is Expected From the Death of DOMA...

Pay Attention to the Records at Autodesk, Inc. (ADSK)

What’s an Investor to Think of Automatic Data Processing (ADP) and Paychex...