On Feb. 26, Atlantic Power Corp (NYSE:AT) did something responsible: It slashed its dividend by 66% in the name of long-term value creation. But the aftermath of its actions shows that dividend haircuts don’t always look good. Let’s dig deeper into Atlantic Power Corp (NYSE:AT)’s decision, peek into the past for some much-needed perspective, and check out the new look of another company that recently received a dividend haircut.

Dawn of the dead dividend
As part of Atlantic Power Corp (NYSE:AT)’s Q4 2012 earnings report, CEO Barry Welch noted that the utility’s board decided that “it was in the best interest of the company and its shareholders to establish a lower and more sustainable Payout Ratio that balances yield and growth and is at the same time consistent with our outlook for current and prospective projects under a range of scenarios.”

In real numbers, this announcement represented a 66% drop in the company’s monthly payouts, a move that would’ve devastated the utility’s 10.2% dividend yield – if not for its share price plummet. 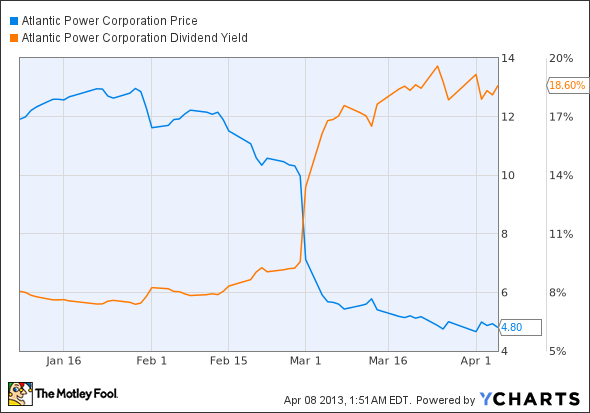 Source: AT data by YCharts.

Look into the past…
Dividend cuts happen. This Friday, TECO Energy, Inc. (NYSE:TE) will celebrate the 10th anniversary of the day it dropped its dividend 46% to balance its books and refocus on its core businesses.

CEO Robert Fagan’s carefully chosen words during the announcement hint at what he was sure would amount to Wall Street suicide: “We recognize the greatest impact will be on our retail shareholders. However, we believe that it will be in their interests longer-term… This level of dividend positions TECO Energy, Inc. (NYSE:TE) to return to… long-term dividend growth when conditions improve.” But since that fateful day, TECO Energy, Inc. (NYSE:TE)’s stock has stepped up a respectable 66% alongside its growing dividend. 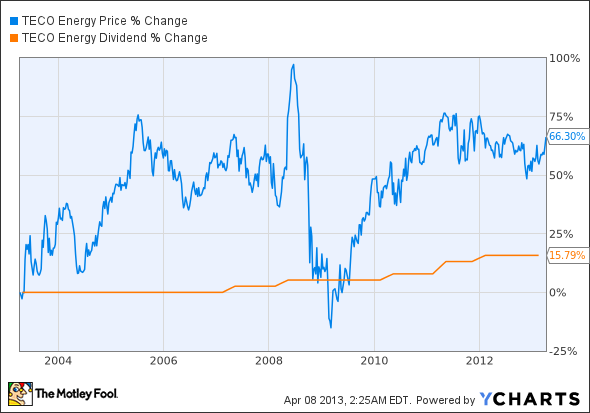 Beware the “Stairmaster”
Companies must decide for themselves whether dividends are the best method to return value to shareholders. Although it’s never inherently a bad idea to boost dividends, investors should beware the “Stairmaster.” A dividend stock that flexes its financial muscles quarter after quarter may not be using its resources intelligently. Step after step, The Southern Company (NYSE:SO) and Xcel Energy Inc (NYSE:XEL) have pushed their dividends higher through the worst of the Great Recession. 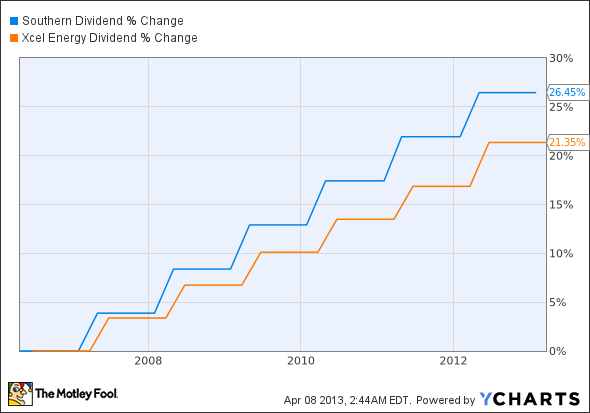 Source: SO Dividend data by YCharts.

Atlantic, why can’t you be more like Exelon Corporation (NYSE:EXC)?
Atlantic wasn’t the only utility to dice up its dividend this past quarter. Exelon Corporation (NYSE:EXC) announced on Feb. 7 that it would slash its dividend by a whopping 40%. But unlike Atlantic, Exelon’s stock has risen 12% since its earnings report. That’s 4.5 percentage points above the Dow Jones U.S. Utilities Price Index and more than nine percentage points better than the S&P 500‘s return. 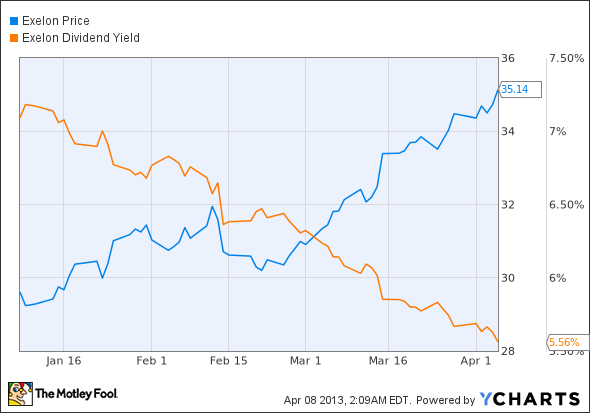 Which dividends deliver?
Regardless of all the number crunching and examples, company fundamentals are irrevocably the means to your dividend end. Some haircuts look good, some look bad, some are necessary, and some aren’t. Pick your investments wisely and you’ll end up with some handsome profits.

Fool contributor Justin Loiseau has no position in any stocks mentioned, but he does use electricity. You can follow him on Twitter @TMFJLo and on Motley Fool CAPS @TMFJLo.The Motley Fool recommends Exelon and Southern Company.

We may use your email to send marketing emails about our services. Click here to read our privacy policy.
Related Insider Monkey Articles
Exelon Corporation (EXC), Arch Coal Inc (ACI) and Others: 1 Person’s...Best Buy Co., Inc. (BBY): Will This Company’s Horrible Customer Service...