We can judge whether Atlantic Power Corp (NYSE:AT) is a good investment right now by following the lead of some of the best investors in the world and piggybacking their ideas. There’s no better way to get these firms’ immense resources and analytical capabilities working for us than to follow their lead into their best ideas. While not all of these picks will be winners, our research shows that these picks historically outperformed the market when we factor in known risk factors.

Atlantic Power Corp (NYSE:AT) shares haven’t seen a lot of action during the second quarter. Overall, hedge fund sentiment was unchanged. The stock was in 12 hedge funds’ portfolios at the end of the second quarter of 2019. At the end of this article we will also compare AT to other stocks including Armstrong Flooring, Inc. (NYSE:AFI), Farmland Partners Inc (NYSE:FPI), and Stellus Capital Investment Corporation (NYSE:SCM) to get a better sense of its popularity.

In addition to following the biggest hedge funds for investment ideas, we also share stock pitches from conferences, investor letters and other sources  like this one where the fund manager is talking about two under the radar 1000% return potential stocks: first one in internet infrastructure and the second in the heart of advertising market. We use hedge fund buy/sell signals to determine whether to conduct in-depth analysis of these stock ideas which take days. We’re going to go over the key hedge fund action surrounding Atlantic Power Corp (NYSE:AT).

What does smart money think about Atlantic Power Corp (NYSE:AT)? 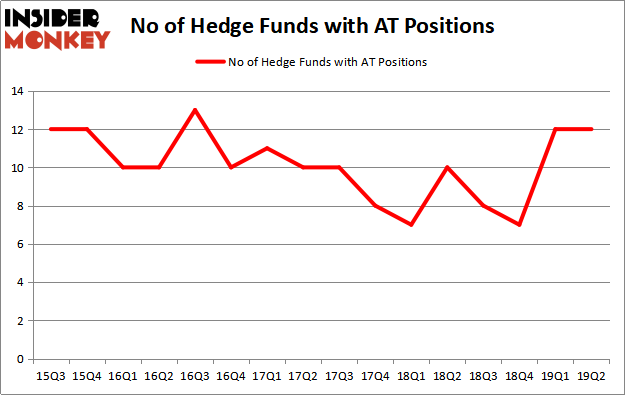 According to Insider Monkey’s hedge fund database, Nathaniel August’s Mangrove Partners has the number one position in Atlantic Power Corp (NYSE:AT), worth close to $18.3 million, amounting to 2.1% of its total 13F portfolio. The second most bullish fund manager is Arrowstreet Capital, led by Peter Rathjens, Bruce Clarke and John Campbell, holding a $3.2 million position; the fund has less than 0.1%% of its 13F portfolio invested in the stock. Remaining members of the smart money with similar optimism include D. E. Shaw’s D E Shaw, Noam Gottesman’s GLG Partners and John Overdeck and David Siegel’s Two Sigma Advisors.

We view hedge fund activity in the stock unfavorable, but in this case there was only a single hedge fund selling its entire position: Springbok Capital. One hedge fund selling its entire position doesn’t always imply a bearish intent. Theoretically a hedge fund may decide to sell a promising position in order to invest the proceeds in a more promising idea. However, we don’t think this is the case in this case because only one of the 800+ hedge funds tracked by Insider Monkey identified as a viable investment and initiated a position in the stock (that fund was PEAK6 Capital Management).

As you can see these stocks had an average of 8.5 hedge funds with bullish positions and the average amount invested in these stocks was $37 million. That figure was $30 million in AT’s case. Armstrong Flooring, Inc. (NYSE:AFI) is the most popular stock in this table. On the other hand Stellus Capital Investment Corporation (NYSE:SCM) is the least popular one with only 4 bullish hedge fund positions. Atlantic Power Corp (NYSE:AT) is not the most popular stock in this group but hedge fund interest is still above average. This is a slightly positive signal but we’d rather spend our time researching stocks that hedge funds are piling on. Our calculations showed that top 20 most popular stocks among hedge funds returned 24.4% in 2019 through September 30th and outperformed the S&P 500 ETF (SPY) by 4 percentage points. Unfortunately AT wasn’t nearly as popular as these 20 stocks and hedge funds that were betting on AT were disappointed as the stock returned -3.3% during the third quarter and underperformed the market. If you are interested in investing in large cap stocks with huge upside potential, you should check out the top 20 most popular stocks among hedge funds as many of these stocks already outperformed the market so far this year.