ArQule, Inc. (ARQL): Are Hedge Funds Right About This Stock?

Before we spend days researching a stock idea we’d like to take a look at how hedge funds and billionaire investors recently traded that stock. S&P 500 Index ETF (SPY) lost 8.7% through October 26th. Forty percent of the S&P 500 constituents were down more than 10%. The average return of a randomly picked stock in the index is -9.5%. This means you (or a monkey throwing a dart) have less than an even chance of beating the market by randomly picking a stock. On the other hand, the top 25 most popular S&P 500 stocks among hedge funds had an average loss of 8.8%. In this article, we will take a look at what hedge funds think about ArQule, Inc. (NASDAQ:ARQL).

ArQule, Inc. (NASDAQ:ARQL) was in 23 hedge funds’ portfolios at the end of September. ARQL has experienced an increase in support from the world’s most elite money managers recently. There were 15 hedge funds in our database with ARQL positions at the end of the previous quarter. Our calculations also showed that ARQL isn’t among the 30 most popular stocks among hedge funds.

How have hedgies been trading ArQule, Inc. (NASDAQ:ARQL)? 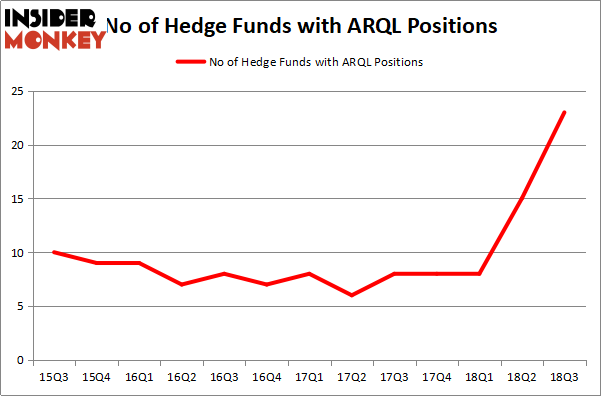 More specifically, Nantahala Capital Management was the largest shareholder of ArQule, Inc. (NASDAQ:ARQL), with a stake worth $68.5 million reported as of the end of September. Trailing Nantahala Capital Management was Millennium Management, which amassed a stake valued at $36 million. Biotechnology Value Fund / BVF Inc, Nexthera Capital, and Renaissance Technologies were also very fond of the stock, giving the stock large weights in their portfolios.

With a general bullishness amongst the heavyweights, key hedge funds were breaking ground themselves. Nexthera Capital, managed by Ori Hershkovitz, established the most valuable position in ArQule, Inc. (NASDAQ:ARQL). Nexthera Capital had $9.8 million invested in the company at the end of the quarter. Thomas Steyer’s Farallon Capital also initiated a $2.8 million position during the quarter. The following funds were also among the new ARQL investors: Peter Rathjens, Bruce Clarke and John Campbell’s Arrowstreet Capital, Bihua Chen’s Cormorant Asset Management, and Andrew Feldstein and Stephen Siderow’s Blue Mountain Capital.

As you can see these stocks had an average of 8.5 hedge funds with bullish positions and the average amount invested in these stocks was $66 million. That figure was $176 million in ARQL’s case. Mistras Group, Inc. (NYSE:MG) is the most popular stock in this table. On the other hand Nuveen California AMT-Free Quality Municipal Income Fund (NYSE:NKX) is the least popular one with only 4 bullish hedge fund positions. Compared to these stocks ArQule, Inc. (NASDAQ:ARQL) is more popular among hedge funds. Considering that hedge funds are fond of this stock in relation to its market cap peers, it may be a good idea to analyze it in detail and potentially include it in your portfolio.