Our data culled from the 659 funds in our database which filed 13Fs for the June quarter, and whose portfolios contained at least 5 long positions in companies valued at $1 billion, revealed some startling statistics. Foremost was the fact that an impressive 95% of them delivered positive stock returns with those long positions during the third quarter based on our methodology. In comparison, S&P 500 ETFs returned just 3.3% during the quarter, so that high a percentage of funds posting gains is a noteworthy feat. However, what we don’t see in 13F filings are hedge funds’ holdings that don’t necessarily do as well: the short-side of their portfolios, as well as their low-yield debt positions. Couple that with demanding fees, and you can see why hedge funds consistently underperform the market net of fees, despite being quality stock pickers. That’s why at Insider Monkey, we analyze only the top stock picks of the top hedge funds, to cut through the fees and underperformance. In this article, we’ll take a look at the performance of Ian Cumming and Joseph Steinberg’s Leucadia National and four of its favorite stocks.

Leucadia’s equity portfolio was valued at $863.25 million on June 30 and consisted of 27 long positions in companies with a market cap of at least $1 billion. Based on the size of those holdings on June 30, those 27 positions delivered weighted average returns of 12.7% during the third quarter, after a loss of 1.4% in the second quarter, which was the first quarter in which we began tracking the fund. It should be noted that our calculations may be different from the fund’s actual returns, as they do not factor in changes to positions during the quarter, or positions that don’t get reported on Form 13Fs, like short positions.

Let’s check out the fund’s activity in Harbinger Group Inc (NYSE:HRG) first, of which there was actually none; the fund held on to its 46.6 million shares in the company, which were valued at $639.82 million on June 30 and accounted for a whopping 74.12% of the value of its equity portfolio on June 30. Given that the fund had so much exposure to the stock, it’s unsurprising that the returns of the stock and fund were relatively close; Harbinger Group returned 14.3% during the third quarter. 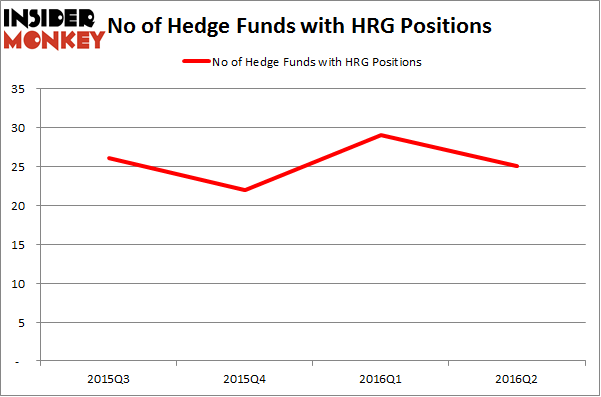 Is Harbinger Group Inc (NYSE:HRG) ready to rally soon? Other hedge funds are becoming less hopeful. The number of long hedge fund bets were trimmed by two during the second quarter to 15 as of June 30. Leucadia was the largest shareholder of Harbinger Group Inc (NYSE:HRG) among those funds, while Omega Advisors had amassed a stake valued at $141.5 million. Tourbillon Capital Partners, MSDC Management, and JHL Capital Group also held valuable positions in the company.

Let’s take a look at Baxter International Inc. (NYSE:BAX) next, which was a new addition to Leucadia’s portfolio during the second quarter. The fund added a 700,000 share position in the stock to its portfolio during the period, which was its second most valuable long position on June 30, though it only totaled 3.67% of the value of its portfolio, in comparison to the massive Harbinger Group position. Shares of Baxter returned 5.6% during the third quarter.

Hedge fund sentiment in the stock was unchanged during the second quarter among the group of investors tracked by Insider Monkey, being in 54 hedge funds’ portfolios at the end of June. The largest stake in Baxter International Inc. (NYSE:BAX) was held by Third Point, which reported holding $2.35 billion worth of stock at the end of June. It was followed by Two Sigma Advisors with a $216.4 million position. Other investors bullish on the company included Citadel Investment Group, Arrowstreet Capital, and Pzena Investment Management.

We move on to the SPDR Gold Trust (ETF) (NYSEARCA:GLD) next, an ETF which tracks gold bullion. One of the most popular ETFs in the world, Leucadia owned 121,894 shares of it on June 30, having hiked its position in the ETF by 210% during the quarter. Unfortunately, it wasn’t a great third quarter for gold prices, which led to a slight dip in the value of the ETF’s shares, which move in lockstep with the value of the precious metal.

72 hedge funds in our database were shareholders of the SPDR Gold Trust (ETF) (NYSEARCA:GLD) at the end of June, up by nine quarter-over-quarter. Among the other funds with large positions in the ETF on June 30 were Kenneth Mario Garschina’s Mason Capital Management, John Paulson’s Paulson & Co, and First Eagle Investment Management.

Lastly is Westar Energy Inc (NYSE:WR), the shares of which returned 1.9% during the third quarter. At the end of the second quarter, Leucadia owned 188,900 shares of the company valued at $10.60 million. The position was another new one added to the fund’s equity portfolio during the second quarter. The company is currently in the process of being acquired by Great Plains Energy.

A total of 24 of the hedge funds tracked by Insider Monkey were bullish on this stock at the end of June, a 9% increase from one quarter earlier. Among these funds, Adage Capital Management held the most valuable stake in Westar Energy Inc (NYSE:WR), which was worth $125.1 million at the end of the second quarter. On the second spot was Magnetar Capital which amassed $109.2 million worth of shares. Moreover, Two Sigma Advisors, GAMCO Investors, and Driehaus Capital were also bullish on Westar Energy Inc (NYSE:WR).