Are Hedge Funds Right to Sell Off CROWN CASTLE (CCI)?

Is CROWN CASTLE In/SH SH (NYSE:CCI) a good bet right now? We like to analyze hedge fund sentiment before doing days of in-depth research. We do so because hedge funds and other elite investors have numerous Ivy league graduates, expert network advisers, and supply chain tipsters working or consulting for them. There is not a shortage of news stories covering failed hedge fund investments and it is a fact that hedge funds’ picks don’t beat the market 100% of the time, but their consensus picks have historically done very well and have outperformed the market after adjusting for risk.

Top hedge funds continue to lose faith in CROWN CASTLE In/SH SH (NYSE:CCI), as hedge fund ownership of the stock declined for the fifth straight quarter and has fallen by 29% during that stretch. The Bill & Melinda Gates Foundation Trust overtook Renaissance Technologies to become the largest Crown Castle shareholder out of the investors we track, owning 5.33 million shares. Crown Castle’s shares have declined slightly over the past year after gaining 35% during the 1-year period prior to that, as the cell tower and fiber cable company’s pace of growth has disappointed investors. On the other hand, Crown Castle’s full-year AFFO is projected to be $2.28 billion, beating estimates the company made in January. Two of the company’s insiders bought shares after they fell close to 52-week lows in late-October, ranking as one of The 25 Biggest Insider Purchases in October.

In today’s marketplace there are many signals investors use to evaluate publicly traded companies. A couple of the best signals are hedge fund and insider trading sentiment. Our researchers have shown that, historically, those who follow the top picks of the elite money managers can trounce their index-focused peers by a solid margin (see the details here).

At Q3’s end, a total of 27 of the hedge funds tracked by Insider Monkey were bullish on this stock, a 16% drop from one quarter earlier. On the other hand, there were a total of 35 hedge funds with a bullish position in CCI at the beginning of this year. With the smart money’s capital changing hands, there exists an “upper tier” of noteworthy hedge fund managers who were boosting their holdings considerably (or already accumulated large positions). 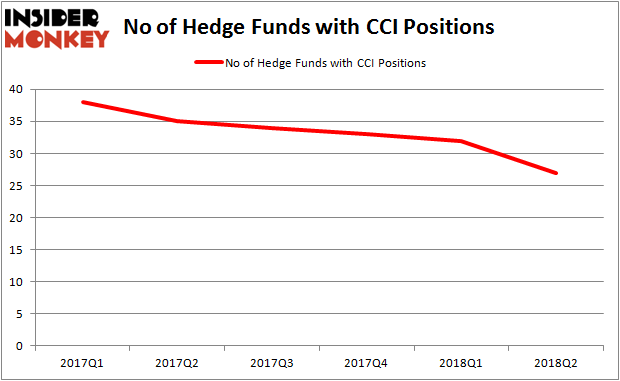 Among these funds, the Bill & Melinda Gates Foundation Trust held the most valuable stake in CROWN CASTLE In/SH SH (NYSE:CCI), which was worth $575 million at the end of the second quarter. On the second spot was Renaissance Technologies which had amassed $570.3 million worth of shares. Moreover, Skylands Capital, Southport Management, and Echo Street Capital Management were also bullish on Crown Castle International Corp. (NYSE:CCI), allocating a large percentage of their 13F portfolios to this stock.

Judging by the fact that CROWN CASTLE In/SH SH (NYSE:CCI) has experienced bearish sentiment from the entirety of the hedge funds we track, logic holds that there exists a select few funds that elected to cut their positions entirely by the end of the second quarter. It’s worth mentioning that Howard Marks’ Oaktree Capital Management said goodbye to the biggest investment of all the hedgies monitored by Insider Monkey, valued at an estimated $31.9 million in stock, and George Soros’ Soros Fund Management was right behind this move, as the fund sold off about $27.9 million worth. These bearish behaviors are intriguing to say the least, as total hedge fund interest dropped by 5 funds by the end of the second quarter.

As you can see these stocks had an average of 25 hedge funds with bullish positions and the average amount invested in these stocks was $989 million. That figure was $1.76 billion in CCI’s case. Capital One Financial Corp. (NYSE:COF) is the most popular stock in this table. On the other hand Telefonica S.A. (ADR) (NYSE:TEF) is the least popular one with only 7 bullish hedge fund positions. CROWN CASTLE In/SH SH (NYSE:CCI) is not the most popular stock in this group but hedge fund interest is still above average, as is the amount of money invested in it. Considering insiders are also buying shares right now, CCI could be a good candidate to consider a long position in, despite the waning hedge fund ownership.

Is CCI A Good Investment Right Now? Is CCI A Good Stock To Buy? NYSE:CCI The 25 Biggest Insider Purchases in October Yahoo Finance