There are several ways to beat the market, and investing in small cap stocks has historically been one of them. We like to improve the odds of beating the market further by examining what famous hedge fund operators such as Carl Icahn and George Soros think. Those hedge fund operators make billions of dollars each year by hiring the best and the brightest to do research on stocks, including small cap stocks that big brokerage houses simply don’t cover. Because of Carl Icahn and other elite funds’ exemplary historical records, we pay attention to their small cap picks. In this article, we use hedge fund filing data to analyze Itau Unibanco Holding SA (ADR) (NYSE:ITUB).

Hedge fund ownership of Itau Unibanco Holding SA (ADR) (NYSE:ITUB) has trended down by over 20% over the past 5 quarters, but was flat during Q2. The Brazilian bank holding company does have two major bulls as of September 30, in the form of Ken Fisher’s Fisher Investments (26.58 million shares) and Ken Heebner’s Capital Growth Management (9.87 million shares). With its underwhelming dividend however, the company was unable to crack the list of dividend stocks that Billionaire Ken Fisher is Bullish About.

In today’s marketplace there are many metrics investors use to analyze publicly traded companies. A couple of the most useful metrics are hedge fund and insider trading sentiment. Our researchers have shown that, historically, those who follow the top picks of the elite hedge fund managers can beat the market by a superb amount (see the details here). 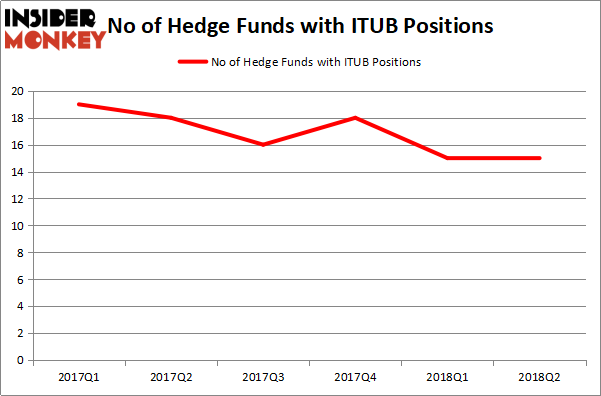 Among these funds, Fisher Asset Management held the most valuable stake in Itau Unibanco Holding SA (ADR) (NYSE:ITUB), which was worth $283.4 million at the end of the second quarter. On the second spot was Oaktree Capital Management which amassed $94.8 million worth of shares. Moreover, Capital Growth Management, Driehaus Capital, and GLG Partners were also bullish on Itau Unibanco Holding SA (ADR) (NYSE:ITUB), allocating a large percentage of their portfolios to this stock.

Judging by the fact that Itau Unibanco Holding SA (ADR) (NYSE:ITUB) has faced declining sentiment from hedge fund managers, logic holds that there lies a certain “tier” of fund managers who sold off their full holdings heading into Q3. Interestingly, Israel Englander’s Millennium Management cut the largest investment of the “upper crust” of funds tracked by Insider Monkey, totaling an estimated $18.4 million in stock, and David Halpert’s Prince Street Capital Management was right behind this move, as the fund said goodbye to about $17.2 million worth. These bearish behaviors are intriguing to say the least, as total hedge fund interest stayed the same (this is a bearish signal in our experience).

As you can see these stocks had an average of 35 hedge funds with bullish positions and the average amount invested in these stocks was $1.45 billion. That figure was $802 million in ITUB’s case. CVS Caremark Corporation (NYSE:CVS) is the most popular stock in this table. On the other hand SU is the least popular one with only 22 bullish hedge fund positions. Compared to these stocks Itau Unibanco Holding SA (ADR) (NYSE:ITUB) is even less popular than QQQ. Considering that hedge funds aren’t fond of this stock in relation to other companies analyzed in this article, it may be a good idea to analyze it in detail and understand why the smart money isn’t behind this stock.