Are Hedge Funds Going To Get Burned By Ryder System, Inc. (R) ?

Is Ryder System, Inc. (NYSE:R) a good place to invest some of your money right now? We can gain invaluable insight to help us answer that question by studying the investment trends of top investors, who employ world-class Ivy League graduates, who are given immense resources and industry contacts to put their financial expertise to work. The top picks of these firms have historically outperformed the market when we account for known risk factors, making them very valuable investment ideas.

Is Ryder System, Inc. (NYSE:R) a healthy stock for your portfolio? The smart money is taking an optimistic view. The number of long hedge fund bets went up by 2 in recent months. Our calculations also showed that R isn’t among the 30 most popular stocks among hedge funds (view the video below).

Unlike former hedge manager, Dr. Steve Sjuggerud, who is convinced Dow will soar past 40000, our long-short investment strategy doesn’t rely on bull markets to deliver double digit returns. We only rely on hedge fund buy/sell signals. We’re going to take a look at the new hedge fund action regarding Ryder System, Inc. (NYSE:R). 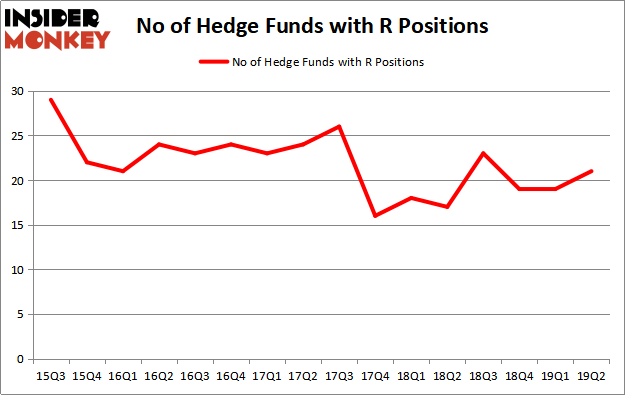 Of the funds tracked by Insider Monkey, Pzena Investment Management, managed by Richard S. Pzena, holds the most valuable position in Ryder System, Inc. (NYSE:R). Pzena Investment Management has a $136.5 million position in the stock, comprising 0.7% of its 13F portfolio. The second most bullish fund manager is Jonathan Barrett and Paul Segal of Luminus Management, with a $132.3 million position; the fund has 3.2% of its 13F portfolio invested in the stock. Remaining professional money managers that hold long positions include Cliff Asness’s AQR Capital Management, Ken Griffin’s Citadel Investment Group and John Overdeck and David Siegel’s Two Sigma Advisors.

As you can see these stocks had an average of 18 hedge funds with bullish positions and the average amount invested in these stocks was $330 million. That figure was $353 million in R’s case. The Medicines Company (NASDAQ:MDCO) is the most popular stock in this table. On the other hand Coca-Cola Consolidated, Inc. (NASDAQ:COKE) is the least popular one with only 11 bullish hedge fund positions. Ryder System, Inc. (NYSE:R) is not the most popular stock in this group but hedge fund interest is still above average. This is a slightly positive signal but we’d rather spend our time researching stocks that hedge funds are piling on. Our calculations showed that top 20 most popular stocks among hedge funds returned 24.4% in 2019 through September 30th and outperformed the S&P 500 ETF (SPY) by 4 percentage points. Unfortunately R wasn’t nearly as popular as these 20 stocks and hedge funds that were betting on R were disappointed as the stock returned -10.1% during the third quarter and underperformed the market. If you are interested in investing in large cap stocks with huge upside potential, you should check out the top 20 most popular stocks among hedge funds as many of these stocks already outperformed the market so far this year.