The latest 13F reporting period has come and gone, and Insider Monkey is again at the forefront when it comes to making use of this gold mine of data. Insider Monkey finished processing more than 730 13F filings submitted by hedge funds and prominent investors. These filings show these funds’ portfolio positions as of June 28th, 2019. In this article we are going to take a look at smart money sentiment towards Aramark (NYSE:ARMK).

Aramark (NYSE:ARMK) has experienced a slight decrease in enthusiasm from smart money in recent months. ARMK was in 36 hedge funds’ portfolios at the end of June. There were 38 hedge funds in our database with ARMK holdings at the end of the previous quarter. Our calculations also showed that ARMK isn’t among the 30 most popular stocks among hedge funds (see the video below).

To most stock holders, hedge funds are seen as worthless, outdated financial vehicles of years past. While there are greater than 8000 funds in operation at the moment, Our researchers look at the leaders of this club, about 750 funds. Most estimates calculate that this group of people administer bulk of all hedge funds’ total asset base, and by tracking their best picks, Insider Monkey has identified various investment strategies that have historically outpaced the market. Insider Monkey’s flagship hedge fund strategy outstripped the S&P 500 index by around 5 percentage points per annum since its inception in May 2014. We were able to generate large returns even by identifying short candidates. Our portfolio of short stocks lost 25.7% since February 2017 (through September 30th) even though the market was up more than 33% during the same period. We just shared a list of 10 short targets in our latest quarterly update .

Unlike this former hedge fund manager who is convinced Dow will soar past 40000, our long-short investment strategy doesn’t rely on bull markets to deliver double digit returns. We only rely on hedge fund buy/sell signals. We’re going to view the fresh hedge fund action regarding Aramark (NYSE:ARMK).

How have hedgies been trading Aramark (NYSE:ARMK)?

At the end of the second quarter, a total of 36 of the hedge funds tracked by Insider Monkey were long this stock, a change of -5% from the previous quarter. By comparison, 27 hedge funds held shares or bullish call options in ARMK a year ago. With hedgies’ sentiment swirling, there exists a few key hedge fund managers who were boosting their stakes substantially (or already accumulated large positions). 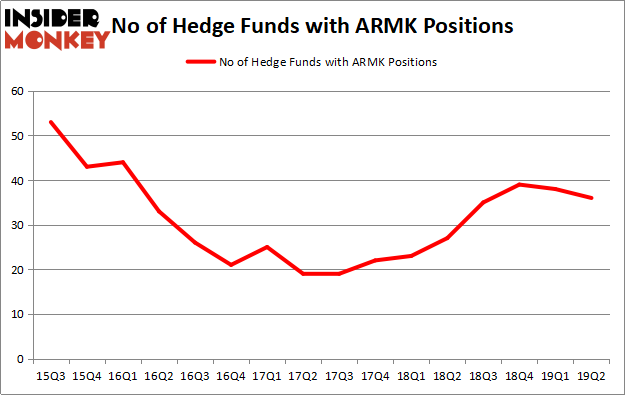 According to Insider Monkey’s hedge fund database, Kensico Capital, managed by Michael Lowenstein, holds the largest position in Aramark (NYSE:ARMK). Kensico Capital has a $281.2 million position in the stock, comprising 5.1% of its 13F portfolio. On Kensico Capital’s heels is Nitorum Capital, led by Seth Rosen, holding a $137.8 million position; the fund has 7.8% of its 13F portfolio invested in the stock. Other members of the smart money that are bullish encompass D. E. Shaw’s D E Shaw, Michael Gelband’s ExodusPoint Capital and Aaron Cowen’s Suvretta Capital Management.

Seeing as Aramark (NYSE:ARMK) has experienced falling interest from the smart money, logic holds that there is a sect of hedgies that decided to sell off their full holdings heading into Q3. At the top of the heap, Philip Hilal’s Clearfield Capital sold off the biggest position of the 750 funds monitored by Insider Monkey, totaling close to $17.4 million in stock, and David Costen Haley’s HBK Investments was right behind this move, as the fund dumped about $13.8 million worth. These transactions are intriguing to say the least, as total hedge fund interest was cut by 2 funds heading into Q3.

As you can see these stocks had an average of 28 hedge funds with bullish positions and the average amount invested in these stocks was $1104 million. That figure was $1026 million in ARMK’s case. Molina Healthcare, Inc. (NYSE:MOH) is the most popular stock in this table. On the other hand Vereit Inc (NYSE:VER) is the least popular one with only 23 bullish hedge fund positions. Compared to these stocks Aramark (NYSE:ARMK) is more popular among hedge funds. Our calculations showed that top 20 most popular stocks among hedge funds returned 24.4% in 2019 through September 30th and outperformed the S&P 500 ETF (SPY) by 4 percentage points. Hedge funds were also right about betting on ARMK as the stock returned 21.2% during Q3 and outperformed the market by an even larger margin. Hedge funds were clearly right about piling into this stock relative to other stocks with similar market capitalizations.

Hedge Funds Pulled The Trigger On Tetra Tech, Inc. (TTEK) A Bit Too Early
Monthly Newsletter Strategy
Download a free copy of our newsletter and see the details inside!
Hedge Fund Resource Center
Related News
Did Hedge Funds Drop The Ball On Aramark (ARMK) ? Is Aramark (ARMK) A Good Stock To Buy According To Hedge Funds? Do Hedge Funds Love Aramark (NYSE:ARMK)? Is Aramark (ARMK) Worthy of Your Portfolio? The Chief Executive Officers of These Four Companies Buy Shares, Plus Insider Selling at Sanmina Corp (SANM) Should You Follow Ionic Capital Management’s Lead And Cut Exposure To Allergan (AGN) & Three Other Stocks? Corsair Capital Betting Heavily on Consumer Discretionary Stocks 11 Largest Auto Insurance Companies In The US In 2019 10 Poorest Cities in America in 2019 8 Lowest Tar and Nicotine Cigarette Brands in 2019
Billionaire Hedge Funds