Apple Inc. (AAPL): Who Is the Top Gainer in the Smartphone Market?

Good news for Apple Inc. (NASDAQ:AAPL) investors. According to the latest report from comScore MobiLens for February 2013, 133.7 million people in the U.S. owned smartphones (57% mobile market penetration) during the three months ending in February, up 8% since November, 2012.

Apple Inc. (NASDAQ:AAPL) ranked as the top OEM with 38.9% of U.S. smartphone subscribers (up 1.1 percent points from January, 2013 and 3.9 percentage points from November, 2012). Samsung continued to be ranked second with 21.3%. HTC, Motorola, and LG all declined in February as compared to January results, as seen from the tables below. 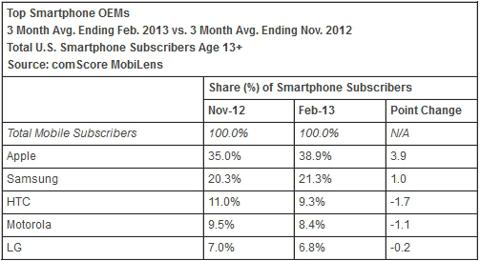 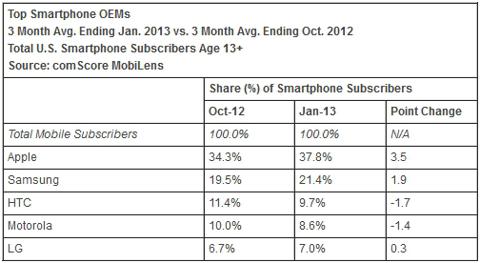 When evaluating the numbers for platform, Google Inc (NASDAQ:GOOG)‘s Android continued to rank as the top smartphone platform with 51.7% market share for February 2013. However, the market share had declined 0.6% as compared to January 2013.

Apple Inc. (NASDAQ:AAPL) had gained market share and increased 1.1% as compared to the previous month. Apple continued to increase it platform share from 34.3% in October 2012 to 38.9% in February 2013. Research In Motion Ltd (NASDAQ:BBRY) ranked third, but had lost 0.5% market share, while  Microsoft Corporation (NASDAQ:MSFT) followed with a 0.1% increase compared to January numbers as seen from the tables below. 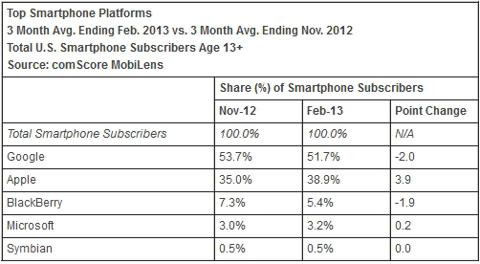 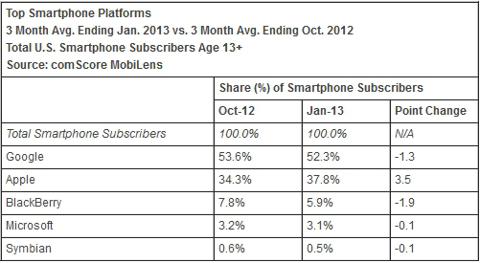 Analysts, on average, are expecting an EPS of $10.13 with revenue of $42.70 billion for the quarter ended March 2013. Apple Inc. (NASDAQ:AAPL) is expected to release Q2 2013 earnings on April 23, 2013. In the last four quarters, Apple has two positive and two negative earnings surprises.

On April 8, 2013, Canaccord Genuity analyst Michael Walkley raised Q2 and Q3 iPhone unit estimates to 37 million and 27 million from 34.5 million and 25 million, respectively, based on the observation of stronger sales of iPhone 4 and 4S models at reduced prices. The analyst also said iPhone 5 sales declined, but were “consistent with normal seasonal patterns.”

Nokia Corporation (ADR) (NYSE:NOK) continues to receive positive feedback for its Lumia phones. Nokia has a healthy balance sheet with $13.13 billion total cash and $7.25 billion total debt. Analysts are estimating an EPS of $(0.05) with revenue of $8.65 billion for the current quarter ending in March 2013. Nokia Corporation (ADR) (NYSE:NOK) is expected to release its Q1 2013 earnings on April 18, 2013.

While both companies have a long-way to regain their market shares, both have the potential to become the top turnaround stories of 2013.

Earlier, as reported by Bloomberg, HTC posted its lowest quarterly profit on record, and missed its revenue target due to the delay of its newest flagship phone. Despite HTC’s new Facebook phone and improved production, HTC continues to face a tough road ahead with upcoming devices from competitors, including Samsung’s new Galaxy S4, which goes on sale in the U.S. on April 26.

Apple Inc. (AAPL): China Survey Says It Has a Lot of Work to Do?Microsoft Corporation (MSFT), Hewlett-Packard Company (HPQ): Is This the Death...