A cute way to get to know someone is to ask him or her to describe three qualities that people usually attribute to them. Now consider if you met Jabil Circuit, Inc. (NYSE:JBL) at a cocktail party (us Europeans invented surrealism after all); what three things would you immediately learn? They missed estimates last time around, Apple Inc. (NASDAQ:AAPL) is a major customer, and it’s on a current PE of 10. Is that enough to start a relationship? It’s time to take a closer look.

It’s been a difficult period for the company. The consumer electronics business hasn’t been firing on all cylinders for a while now, and it’s natural for this to feed through into the contract manufacturers. Moreover, they (Jabil Circuit, Inc. (NYSE:JBL) etc) are more sensitive because they have already committed their cost structure in order to service contracts. If the end demand turns down then they are usually lumbered with ongoing costs that eat into margins. As such, if you want to tell the direction of its earnings you have to first guess how its mix of end market customers will be performing.

I would argue that this means that companies like Jabil Circuit, Inc. (NYSE:JBL) should trade on a lowly PE, but the market is not obliged to agree with me! On the contrary, its stock price seems to follow the direction of its earnings and not necessarily its evaluation. The following chart demonstrates the relationship. 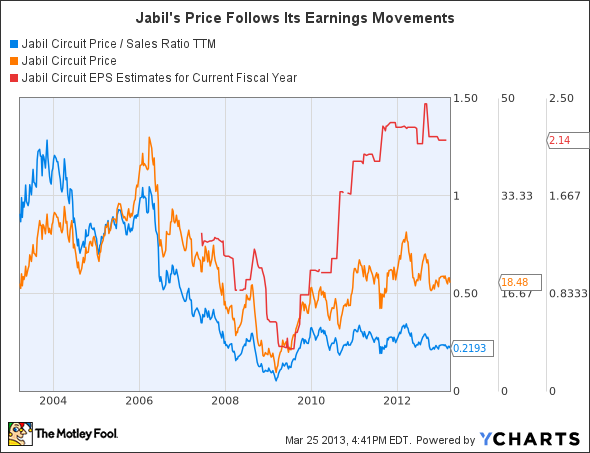 So if we are agreeing (I won’t personally but that’s another matter) that the key is to guess the earnings direction then what are the key upside drivers and downside risks to the current forecasts?

In order to quickly run through some of the issues going into 2013 I have an earlier article linked here. Jabil Circuit, Inc. (NYSE:JBL) operates through three segments, and I’ve broken out Q2 revenue share in the following chart. It’s a familiar story with the Diversified Manufacturing Services (DMS) segment. Specialized services are doing fine and now make up 31% of total revenues, but the problems with health care & instrumentation (6%) and industrial & clean tech (10%) remain unsolved. The problem with the latter is that the solar industry is still suffering from significant overcapacity thanks to government cutbacks. Revenues were up 11%, but margins eroded a bit thanks to the faster than expected integration of the Nypro acquisition. Indeed, Nypro (healthcare, rigid packaging and consumer electronics) is expected to help drive segmental revenue and profitability going forward.

Of course DMS attracts most of the attention because it contains the part of the business that manufactures plastic casings for the iPhone. Naturally analysts rush to upgrade and downgrade DMS’ prospects based on their view of Apple Inc. (NASDAQ:AAPL)’s sales. Unfortunately, Jabil Circuit, Inc. (NYSE:JBL) is pretty tight lipped over its Apple Inc. (NASDAQ:AAPL) related work, but it’s hard not to conclude that at least some of the extra capital expenditures planned for this year are a consequence. On a more positive note the forecast bounce-back in Q4 could be a good indication for iPhone shipments.