At the end of June, Onyx Pharmaceuticals, Inc. (NASDAQ:ONXX) announced that it had rejected an offer from Amgen, Inc. (NASDAQ:AMGN) that valued the company at $120 per share, or about $8.8 billion. Management stated that the offer undervalued the company’s potential, which sent shares even higher. Things have cooled down a bit after no immediate buyer emerged, although shares are still well ahead of where they began the year. 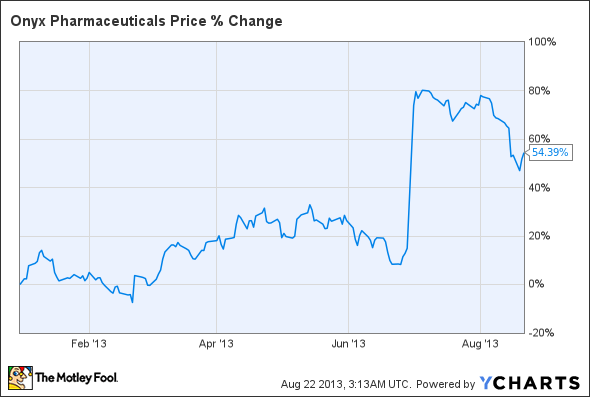 Amgen, Inc. (NASDAQ:AMGN) has since bumped its offer up to $130 per share, or $9.5 billion, but other big sharks such as AstraZeneca plc (ADR) (NYSE:AZN) are circling. Why is Onyx Pharmaceuticals, Inc. (NASDAQ:ONXX) suddenly on Big Pharma’s radar? What’s so great about the company that makes it worth almost $10 billion?

Kyprolis, and those other two

Most of the attention being paid to Onyx Pharmaceuticals, Inc. (NASDAQ:ONXX) revolves around its multiple myeloma drug Kyprolis. The indication has had relatively few treatment options in years past, so the Food and Drug Administration granted approval with just mid-stage data. The proteasome inhibitor currently treats patients who have taken at least two prior therapies, but it could be expanded to treat patients after just one prior therapy pending data from an ongoing late-stage trial.

That could be huge, but what would a potential buyer be getting right now? Kyprolis netted sales of $125 million in the first half of 2013. That’s a strong start for limited approval, but it’s far from best-case scenario projections of $2.2 billion per year. While all eyes are on the multiple myeloma drug, any potential buyer would get a decent rising star in Nexavar as well. The drug, partnered with Bayer, treats liver and kidney cancer and generated revenue of $151 million in the first six months of the year. Onyx Pharmaceuticals, Inc. (NASDAQ:ONXX) also captures a 20% royalty on Stivarga sales from Bayer, which amounted to $19 million so far this year — pocket lint for Amgen, Inc. (NASDAQ:AMGN) or AstraZeneca plc (ADR) (NYSE:AZN).

The other side of the coin

What investors need to ask is, what’s the motivating factor for Amgen, Inc. (NASDAQ:AMGN) or AstraZeneca plc (ADR) (NYSE:AZN)? Well, Amgen is set to lose exclusivity on several multibillion-dollar drugs, including Aranesp, Epogen, and Neupogen in coming years. Those three alone brought in $5.25 billion for the biotech giant in 2012. I believe there’s enough positive momentum in Amgen’s pipeline and biosimilar program to make up for the loss, but it never hurts to be over-prepared! Buying Onyx Pharmaceuticals, Inc. (NASDAQ:ONXX) could be just the thing Amgen, Inc. (NASDAQ:AMGN) needs. 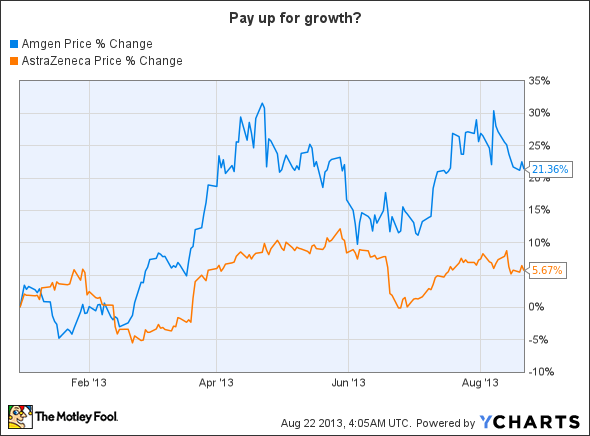 Meanwhile, AstraZeneca plc (ADR) (NYSE:AZN) has had a rough time dealing with the patent cliff. First-half revenue and EPS are down by double digits compared with the year-ago period thanks to expired patent protection for Seroquel, Atacand, and Crestor. The pipeline has some promise, but it’s not exactly making anyone drool. Acquiring Onyx Pharmaceuticals, Inc. (NASDAQ:ONXX) would inject some instant offense to AstraZeneca’s business — and it hasn’t been shy about pulling the trigger. The company purchased Omthera and Pearl Therapeutics earlier this year for a combined $1.5 billion. It would have to pay up considerably more for Onyx, but it could be worth it down the road.