With the third-quarter round of 13F filings behind us it is time to take a look at the stocks in which some of the best money managers in the world preferred to invest or sell heading into the fourth quarter. One of these stocks was American International Group Inc (NYSE:AIG).

Is American International Group Inc (NYSE:AIG) the right pick for your portfolio? The smart money is becoming hopeful. The number of bullish hedge fund positions inched up by 5 lately. Our calculations also showed that AIG isn’t among the 30 most popular stocks among hedge funds. AIG was in 41 hedge funds’ portfolios at the end of September. There were 36 hedge funds in our database with AIG holdings at the end of the previous quarter.

At Q3’s end, a total of 41 of the hedge funds tracked by Insider Monkey held long positions in this stock, a change of 14% from the previous quarter. Below, you can check out the change in hedge fund sentiment towards AIG over the last 13 quarters. With the smart money’s capital changing hands, there exists a few noteworthy hedge fund managers who were boosting their stakes substantially (or already accumulated large positions). 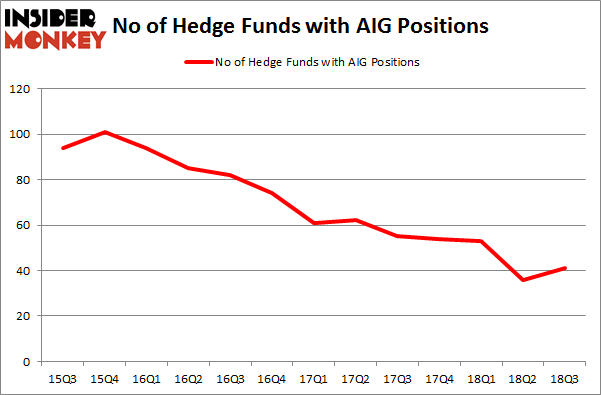 Of the funds tracked by Insider Monkey, Robert Rodriguez and Steven Romick’s First Pacific Advisors LLC has the number one position in American International Group Inc (NYSE:AIG), worth close to $696.9 million, comprising 5% of its total 13F portfolio. Sitting at the No. 2 spot is Pzena Investment Management, managed by Richard S. Pzena, which holds a $473.2 million position; the fund has 2.3% of its 13F portfolio invested in the stock. Other hedge funds and institutional investors that are bullish consist of John A. Levin’s Levin Capital Strategies, and Phill Gross and Robert Atchinson’s Adage Capital Management.

As you can see these stocks had an average of 35.5 hedge funds with bullish positions and the average amount invested in these stocks was $1.67 billion. That figure was $1.76 billion in AIG’s case. Humana Inc (NYSE:HUM) is the most popular stock in this table. On the other hand Metlife Inc (NYSE:MET) is the least popular one with only 24 bullish hedge fund positions. American International Group Inc (NYSE:AIG) is not the most popular stock in this group but hedge fund interest is still above average. This is a slightly positive signal but we’d rather spend our time researching stocks that hedge funds are piling on. In this regard HUM might be a better candidate to consider a long position.

Is The PNC Financial Services Group, Inc. (PNC) A Good Stock To Buy?
Monthly Newsletter Strategy
Download a free copy of our newsletter and see the details inside!
Hedge Fund Resource Center
Related News
Clearbridge Investments Betting On A Shift From Growth and Momentum 76 Best Insurance Dividend Stocks To Invest In Can Hedge Funds See Into The Future? 10 Biggest Socially Irresponsible Companies In America 11 Best Insurance Companies to Invest in 2017 10 Biggest Recent Accounting Scandals in America Here Are The Changes Paulson & Co. Made To Its Portfolio To Recover After a Bad 2016 The 10 Best Islands to Visit in 2019 5 Most Socially Responsible Companies in America 5 Ways You Can Eliminate Credit Card Debt
Billionaire Hedge Funds