American Express Company (AXP) Is Soaring Past the Dow (.DJI)

Investors are anxiously awaiting the Federal Open Market Committee statement that will be released tomorrow at 2 p.m. EDT. Currently, as part of its quantitative-easing program, the Federal Reserve is purchasing $85 billion worth of long-term assets each month in an effort to keep rates down and the economy moving forward. The Fed is trying not to surprise investors and has said it will keep the purchases going until unemployment falls to 6.5%, inflation rises past the Fed’s target range, or long-term inflation expectations take off. 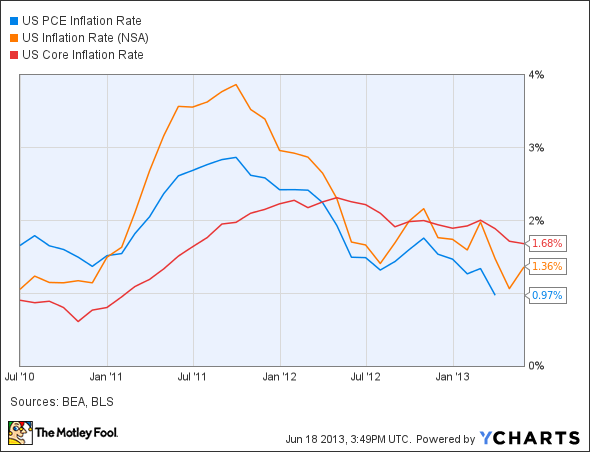 While many investors track the CPI as their favored measure of inflation, the Fed’s favorite measure is the Department of Commerce’s price index for personal-consumption expenditure, or PCE, which has been trending lower than the CPI the past year. We have to wait until the end of the month for the Department of Commerce to release May figures for the PCE, which is expected to remain well below the Fed’s 2% to 2.5% target.

In other news, housing starts rose a seasonally adjusted 58,000 in May to 914,000 but missed analyst expectations of 953,000. It’s important to note that housing starts are continuing their slow trend back toward their historical average of 1.5 million. The housing market has been slowly recovering and signs appear that it is getting stronger. Yesterday, the National Association of Home Builders reported that for the first time in more than six years, more homebuilders were optimistic about the housing market than were pessimistic.