Hedge Funds and other institutional investors have just completed filing their 13Fs with the Securities and Exchange Commission, revealing their equity portfolios as of the end of June. At Insider Monkey, we follow nearly 750 active hedge funds and notable investors and by analyzing their 13F filings, we can determine the stocks that they are collectively bullish on. One of their picks is American Axle & Manufacturing Holdings, Inc. (NYSE:AXL), so let’s take a closer look at the sentiment that surrounds it in the current quarter.

American Axle & Manufacturing Holdings, Inc. (NYSE:AXL) shares haven’t seen a lot of action during the third quarter. Overall, hedge fund sentiment was unchanged. The stock was in 20 hedge funds’ portfolios at the end of September. At the end of this article we will also compare AXL to other stocks including GasLog Partners LP (NYSE:GLOP), US Concrete Inc (NASDAQ:USCR), and Altus Midstream Company (NASDAQ:ALTM) to get a better sense of its popularity.

Unlike the largest US hedge funds that are convinced Dow will soar past 40,000 or the world’s most bearish hedge fund that’s more convinced than ever that a crash is coming, our long-short investment strategy doesn’t rely on bull or bear markets to deliver double digit returns. We only rely on the best performing hedge funds‘ buy/sell signals. Let’s check out the latest hedge fund action encompassing American Axle & Manufacturing Holdings, Inc. (NYSE:AXL).

Heading into the fourth quarter of 2019, a total of 20 of the hedge funds tracked by Insider Monkey were bullish on this stock, a change of 0% from one quarter earlier. Below, you can check out the change in hedge fund sentiment towards AXL over the last 17 quarters. With hedge funds’ sentiment swirling, there exists a select group of key hedge fund managers who were increasing their holdings substantially (or already accumulated large positions). 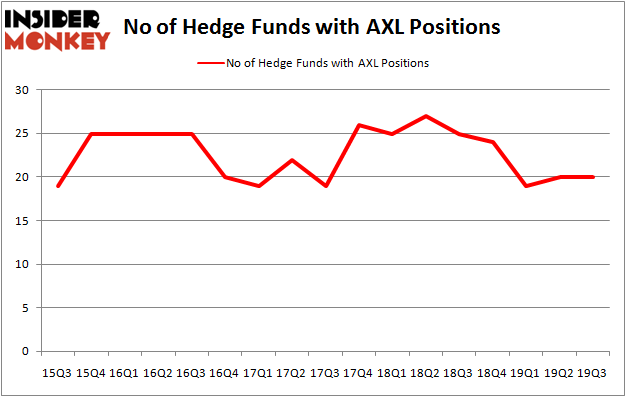 Because American Axle & Manufacturing Holdings, Inc. (NYSE:AXL) has experienced falling interest from hedge fund managers, it’s safe to say that there lies a certain “tier” of money managers that slashed their full holdings in the third quarter. Interestingly, Robert Polak’s Anchor Bolt Capital dropped the biggest investment of all the hedgies monitored by Insider Monkey, worth an estimated $9.1 million in stock. Sander Gerber’s fund, Hudson Bay Capital Management, also sold off its stock, about $6.6 million worth. These moves are interesting, as total hedge fund interest stayed the same (this is a bearish signal in our experience).

As you can see these stocks had an average of 9 hedge funds with bullish positions and the average amount invested in these stocks was $40 million. That figure was $81 million in AXL’s case. US Concrete Inc (NASDAQ:USCR) is the most popular stock in this table. On the other hand Altus Midstream Company (NASDAQ:ALTM) is the least popular one with only 5 bullish hedge fund positions. Compared to these stocks American Axle & Manufacturing Holdings, Inc. (NYSE:AXL) is more popular among hedge funds. Our calculations showed that top 20 most popular stocks among hedge funds returned 37.4% in 2019 through the end of November and outperformed the S&P 500 ETF (SPY) by 9.9 percentage points. Hedge funds were also right about betting on AXL as the stock returned 20% during the first two months of Q4 and outperformed the market by an even larger margin. Hedge funds were clearly right about piling into this stock relative to other stocks with similar market capitalizations.