Ambarella Inc (AMBA): Are Hedge Funds Right About This Stock?

Ambarella Inc (NASDAQ:AMBA) has experienced an increase in enthusiasm from smart money lately. AMBA was in 15 hedge funds’ portfolios at the end of the third quarter of 2018. There were 14 hedge funds in our database with AMBA positions at the end of the previous quarter. Our calculations also showed that AMBA isn’t among the 30 most popular stocks among hedge funds.

What does the smart money think about Ambarella Inc (NASDAQ:AMBA)? 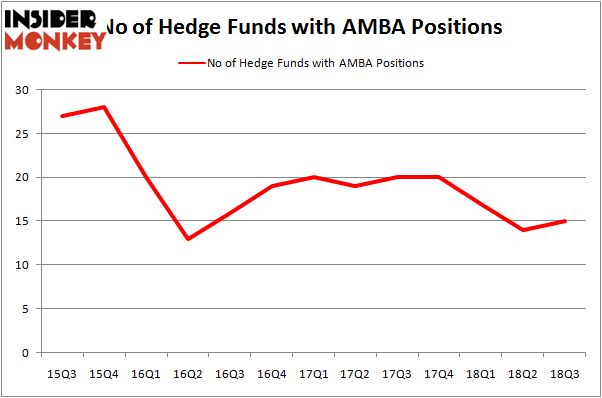 Consequently, specific money managers have been driving this bullishness. Potrero Capital Research, managed by Jack Ripsteen, initiated the largest position in Ambarella Inc (NASDAQ:AMBA). Potrero Capital Research had $11.6 million invested in the company at the end of the quarter. Robert Rodriguez and Steven Romick’s First Pacific Advisors LLC also made a $11.4 million investment in the stock during the quarter. The other funds with new positions in the stock are Peter Muller’s PDT Partners, Phill Gross and Robert Atchinson’s Adage Capital Management, and David Alexander Witkin’s Beryl Capital Management.

As you can see these stocks had an average of 13 hedge funds with bullish positions and the average amount invested in these stocks was $133 million. That figure was $82 million in AMBA’s case. AtriCure Inc. (NASDAQ:ATRC) is the most popular stock in this table. On the other hand Hess Midstream Partners LP (NYSE:HESM) is the least popular one with only 6 bullish hedge fund positions. Ambarella Inc (NASDAQ:AMBA) is not the most popular stock in this group but hedge fund interest is still above average. This is a slightly positive signal but we’d rather spend our time researching stocks that hedge funds are piling on. In this regard ATRC might be a better candidate to consider a long position.