Amazon.com, Netflix and 8 Other Overvalued Stocks in the S&P 500

The investment takeaway from this earnings season is unmistakable: Growth is slowing as companies do their best to ensure that current sales don’t fall below the levels seen in late 2011. And this changing growth dynamic is slowly causing investors to reconsider what kind of stocks to own. Value plays with considerable balance sheet or dividend support are getting a fresh look, while high-growth business models are now under ever-greater scrutiny.

Take Chipotle Mexican Grill, Inc. (NYSE:CMG) as an example. Roughly six weeks ago, I cautioned that “Chipotle’s 2014 P/E is now higher than its forecasted earnings growth, which is a key marker of overvaluation.” Sure enough, Chipotle soon delivered downbeat profit guidance for 2013, and shares have tumbled lower by nearly $100.

Though comparing earnings growth to a price-to-earnings (P/E) ratio may seem to be an over-simplified analysis of a stock’s true value, it actually has a great deal of relevance — at least in a qualitative perspective. Let me explain.

Richly-valued stocks are valued on their long-term growth prospects, and not on their near-term earnings prospects. Indeed you’ll find many good companies that generate little or no profits early in their development. Investors give them a pass. Yet as we saw in the case of Netflix, Inc. (NASDAQ:NFLX), that pass expires the minute that growth slows, and quite suddenly P/E ratios start to matter.

Now, using Chipotle as an example, not only have analysts had to lower their long-term profit assumptions for this restaurant chain, but they have also had to lower a likely targeted P/E multiple on that lowered P/E forecast.

That’s why, in this market environment, you need to think twice about owning any stock that sports a high P/E multiple. These companies may be able to grow faster than most, but they are still likely to feel the effects of a slowing economy — and may see their P/E ratios compress over time. 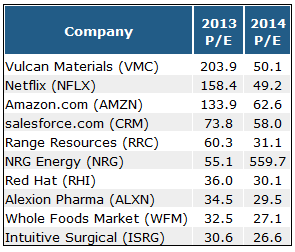 The view into 2014 is essential to confirm whether these stocks are overvalued. For example, Netflix is making heavy investments in an international expansion, so 2013 profits are being dampened, leading to the appearance of an exorbitant P/E ratio. Yet even into 2014, when international divisions will no longer be dragging down profits, this stock is still quite expensive, trading at roughly 50 times the 2014 profit view.

Amazon.com, Inc. (NASDAQ:AMZN) is another example where earnings didn’t matter in the past, but soon will. Amazon recently delivered downbeat guidance, leading the 2013 consensus earnings forecast to drop from around $2.30 to $1.80 per share. Analysts at Merrill Lynch trimmed their 2014 earnings forecast from $5.16 to $4.68 a share — higher than the $3.80 per-share earnings consensus. To justify a stock price that still trades at such a rich forward multiple, investors have to assume that Amazon’s profit growth will be very strong in 2015, 2016 and beyond. Yet it’s fair to wonder whether Amazon can continue to grow at such a fast pace, now that it is so large.

These same concerns can be spelled out for companies like salesforce.com, inc. (NYSE:CRM), Intuitive Surgical, Inc. (NASDAQ:ISRG) and even Whole Foods Market, Inc. (NASDAQ:WFM). These are great companies with phenomenal track records, yet the current valuations imply very strong growth still to come, even though these firms now sport much larger revenue bases than in the past. One false move, and it’s curtains.

Risks to Consider: The market’s recent pullback may just be a pause before the next move up — if investors conclude that the U.S. economy will be on stronger footing in 2013 and 2014. If so, these frothy stocks can get frothier still.

Action to Take –> As we’ve seen with Chipotle Mexican Grill, Netflix and so many others, richly-valued stocks can get hammered once growth starts to slow. In this challenging market, the winds are blowing even stronger as investors shift from “risk-on” stocks to “risk-off.” If you own any stocks in the table above, then you need to stress test that current forecasts for future growth can be met. If you spot any trouble signs (such as a warning from a key competitor), then don’t wait around until the music stops.

Are Costco’s Growth Days Over?

Is eBay a Better Buy Than Amazon.com, Inc. (AMZN)?

A Rare Opportunity to Buy one of Goldman’s Favorite Stocks at a Discount...
Monthly Newsletter Strategy
Download a free copy of our newsletter and see the details inside!
Hedge Fund Resource Center
Billionaire Hedge Funds