E-commerce is a megatrend that retail investors should be looking to capitalize on. At a time where overall U.S. consumer spending has crept along at an average annual growth rate of under 2%, e-commerce has been growing by leaps and bounds. E-tail sales were up by 15% in 2012.

Opportunities abound, especially if you’re willing to zig while others zag. We’ll take a look at one of those more ziggy opportunities below.

But first, let’s face it. When it comes to investing opportunities in e-commerce, Amazon.com, Inc. (NASDAQ:AMZN) is the elephant in the room. 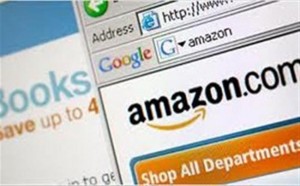 It’s been staking out an ever-more-dominant position in the industry. Amazon has grown its annual revenues by some 314% since 2008. Its ever-expanding offerings are pummeling brick-and-mortar stores across the U.S.

Amazon.com, Inc. (NASDAQ:AMZN) also sells at a price that makes many investors – including this one – cringe. Forward earnings estimates for Amazon come in somewhere between $1.39 and $1.67 a share in 2013. That puts the e-tail giant selling at a 1-year forward PE of somewhere between 159 and 190.

What’s more, Amazon’s continuing plans to get products to consumers faster has brought with it many new warehouses – ongoing expenses that could zap margins for years to come.

All that makes Amazon a risky proposition.

But it just so happens that there’s another fast-growing e-commerce play with an already dominant position and bright prospects for accelerating growth. And this one sells at a very reasonable multiple of around 20 times forward earnings.

It also happens to be a name with which you’re probably very familiar: eBay Inc (NASDAQ:EBAY). That’s right. One of the true progenitors of e-commerce is also still – or perhaps, again – one of its leaders.

Although eBay Inc (NASDAQ:EBAY) hasn’t taken the world by storm over the past several years the way Amazon has, it has managed to reach its tentacles out into many areas of e-commerce. Its flagship and namesake market, eBay, is again growing, with quarterly revenues up 16% over the prior year. But eBay’s portfolio also includes a number of other brands, some more significant to its future, in PayPal, BillMeLater and StubHub.

PayPal revenues now represent 39% of eBay’s revenues, and they are growing at a clip of 24% year over year, driving much of eBay’s growth. The company’s overall annual revenues are up by an average of better than 20% since 2009.

Sure, that trails Amazon.com, Inc. (NASDAQ:AMZN)’s near 50% annual revenue growth rate over that time. Still, it’s not too shabby. And eBay Inc (NASDAQ:EBAY) has shined brighter than Amazon in turning those revenues into profits. Earnings since 2009 have grown by 192% for eBay, while Amazon’s have shrunk.

Here’s a quick look at how the two stack up in earnings since April 2009: 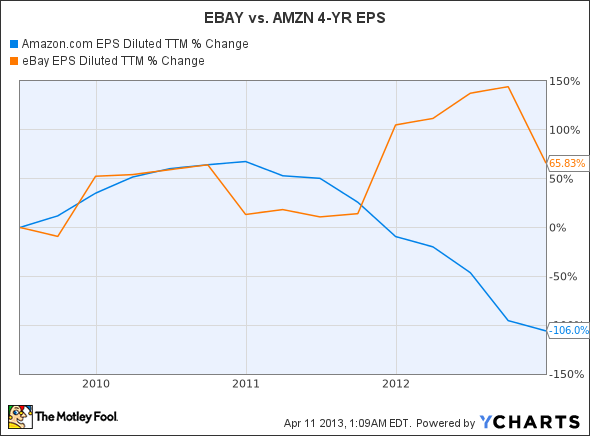 Let’s take a closer look at eBay Inc (NASDAQ:EBAY)’s position in the industry. In 2012, eBay’s various brands were involved in more than $175 billion of retail sales. That means that the company is now involved in 19% of global e-commerce and almost 2% of total global retail, CEO John Donahoe says.

Those are some impressive numbers.

What lies ahead for eBay, as Donahoe says, are “substantial long-term growth opportunities.” He expects them to come from a number of eBay’s brands, including PayPal, BillMeLater and the flagship eBay market.

Right now, eBay Inc (NASDAQ:EBAY) is positioned well for the continuing consumer transition into mobile e-commerce. Mobile transactions are growing fast for PayPal, but still account for just about 10% of its transactions. That leaves a lot of room for growth.

And regardless of whether they are executed on a mobile device or a desktop or laptop computer, eBay makes the same amount from its transactions. That’s an enviable position at a time when even Internet giants like Google Inc (NASDAQ:GOOG) are wrestling with the need to adapt to a mobile world that so far offers a less lucrative set of opportunities.

Despite being a less risky proposition than a high-flyer like Amazon.com, Inc. (NASDAQ:AMZN), eBay is not without its dangers. Looming large are payment systems that compete directly with PayPal.

There are plenty, from small, venture capital-funded startups like WePay and Boku, to more established e-payment solutions like GoogleWallet and Visa’s V.me, all looking to carve away a slice of PayPal’s pie.

And looming even larger, perhaps, is the prospect of a mobile payment system developed by Apple Inc. (NASDAQ:AAPL). With more than 500 million iTunes users already in Apple’s payment network, a digital wallet from Apple Inc. (NASDAQ:AAPL) could be a game changer for eBay Inc (NASDAQ:EBAY). According to recent reports, an Apple digital wallet is looking more likely, and it could happen as early as this year.

That’s a storyline eBay investors will want to keep a close eye on.

No longer the Internet auction house that grabbed our attention in the days of Web 1.0, eBay has transformed itself to again take a leading position in e-commerce with its popular and fast-growing services like PayPal and BillMeLater. That has eBay growing revenues and earnings quickly, and its brightest days may still lie ahead.

But for that to happen, eBay Inc (NASDAQ:EBAY) must fend off competition from upstarts as well as tech and financial heavyweights. Investors must keep watch for changes in that landscape.

Apple Store Boylston Street: This Apple Store Closes Its Doors After Boston...SanDisk Corporation (SNDK): Be Prepared, This Stock Could Jump After Earnings...