Tobacco giant Altria Group Inc (NYSE:MO) has long been one of my favorite core holdings. In my opinion, the company’s stable growth, low beta and high dividend yield all make it it as close to a bullish “no-brainer” as you can get in today’s uncertain and volatile market. However, bearish critics will assert that the tobacco industry, while agile and talented at averting tightening regulations, is running out of steam (or smoke). Should investors follow my lead and have faith in Altria Group Inc (NYSE:MO), or should they take heed of these warnings and steer clear of this oft-vilified sector altogether?

A villain by a different name?

While Altria Group Inc (NYSE:MO) may be an unfamiliar name to some, most people recognize it by its original name, Philip Morris.

A growing slice of a growing profit pool

Although domestic tobacco sales volume has decreased over the past five years, the industry’s profit pool has actually grown since 2007, rising at a CAGR (compounded annual growth rate) of 4.5% to $13.8 billion at the end of 2012. This increased profitability was a direct result of cost-cutting measures, increased promotional activities, and diversifying acquisitions.

Altria Group Inc (NYSE:MO)’s share of this profit pool rose from 44% to 52% during those five years, as a result of its acquisitions of John Middleton Cigars in 2007 and STETHUSCOPE INTL INC. (FRA:UST)

. in 2009. John Middleton Cigars specializes in machine-made cigars such as Black & Mild, while UST is a leading manufacturer of smokeless tobacco products, also known as chewing tobacco, and owns industry-leading brands Copenhagen and Skoal. By adding these well-known brands to its strong portfolio of cigarette products, such as Marlboro, Altria easily maintains a dominant market share in the U.S. tobacco market. Breeding brand loyalty is a key point for tobacco companies, since restrictive regulations are steadily making it harder to differentiate the products by their packages, which must be covered up by increasingly larger health warnings.

Its iconic flagship brand, Marlboro, remains the The Coca-Cola Company (NYSE:KO) of the tobacco industry, claiming 42% of the U.S. market in 2012. Altria used a new branding strategy in 2012 to highlight the differences between the four main varieties of Marlboro – Red, Gold, Green and Black – in an effort to target a wider range of adult smokers.

Revenue at its smokeless products segment, boosted by its acquisitions of UST and John Middleton Cigars, rose 23.8% year-on-year from $1.37 billion to $1.69 billion. Altria controls 55% of the domestic smokeless tobacco market, with Copenhagen and Skoal controlling half of the chewing tobacco market. Altria was able to expand its geographic reach across the U.S. by introducing new products such as Copenhagen Southern Blend and Skoal Ready Cut.

Despite actually producing smoke, cigars such as Black & Mild are categorized together with its smokeless products as well. Black & Mild controls 30% of the domestic market for machine-made cigars.

Altria’s wine and beer segment, which includes Ste. Michelle Wine Estates and its 28.7% stake in SABMiller plc (LON:SAB), grew 39.2% over the past three years, from $403 million to $561 million. Even though its footprint remains small, its continued growth is promising, since it can be used to offset unexpected losses at other segments.

Altria’s primary competitors in the United States are Reynolds American (NYSE:RAI) and Lorillard (NYSE:LO). Let’s first compare their top and bottom line growth over the past three years to gauge their growth. 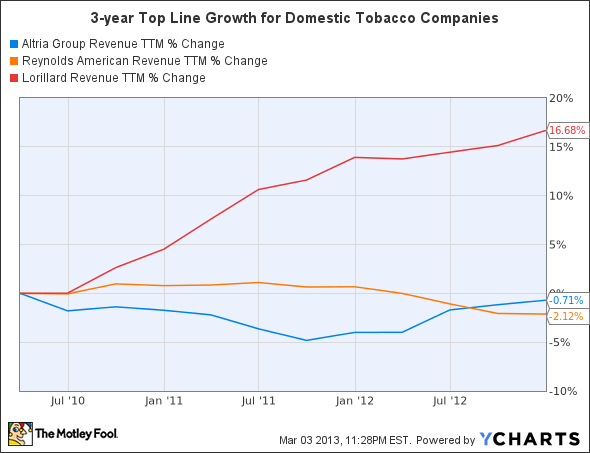 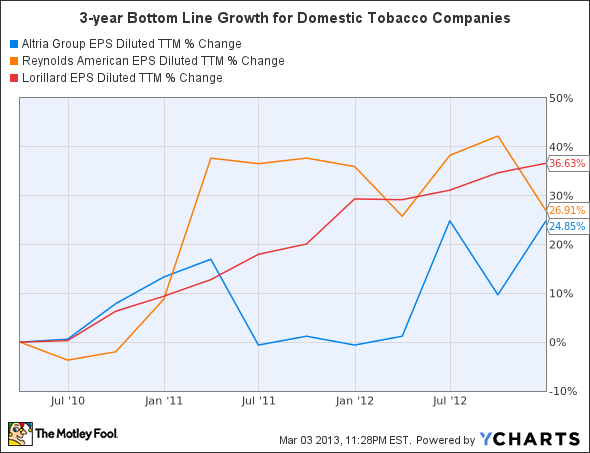 Although it appears that Altria is lagging behind Lorillard, it’s important to remember that the creator of Newport cigarettes is a much smaller company, with a market cap of $14.5 billion compared to Altria’s $67.8 billion. Reynolds American, which produces American Spirit cigarettes and Santa Fe chewing tobacco, has suffered the most with its comparatively lower brand recognition and penetration.