Concerns over rising interest rates and expected further rate increases have hit several stocks hard since the end of the third quarter. NASDAQ and Russell 2000 indices are already in correction territory. More importantly, Russell 2000 ETF (IWM) underperformed the larger S&P 500 ETF (SPY) by about 4 percentage points so far in October. Hedge funds and institutional investors tracked by Insider Monkey usually invest a disproportionate amount of their portfolios in smaller cap stocks. We have been receiving indications that hedge funds were paring back their overall exposure and this is one of the factors behind the recent movements in major indices. In this article, we will take a closer look at hedge fund sentiment towards Alphabet Inc (NASDAQ:GOOGL).

In the 21st century investor’s toolkit there are plenty of indicators market participants put to use to analyze publicly traded companies. A pair of the best indicators are hedge fund and insider trading indicators. Our researchers have shown that, historically, those who follow the top picks of the top money managers can outclass the S&P 500 by a significant margin. Insider Monkey’s flagship best performing hedge funds strategy returned 17.4% year to date and outperformed the market by more than 14 percentage points this year. This strategy also outperformed the market by 3 percentage points in the fourth quarter despite the market volatility (see the details here). That’s why we believe hedge fund sentiment is a useful indicator that investors should pay attention to.

What does the smart money think about Alphabet Inc (NASDAQ:GOOGL)?

Heading into the fourth quarter of 2018, a total of 125 of the hedge funds tracked by Insider Monkey held long positions in this stock, a change of 1% from the second quarter of 2018. The graph below displays the number of hedge funds with bullish position in GOOGL over the last 6 quarters. With hedgies’ positions undergoing their usual ebb and flow, there exists a select group of notable hedge fund managers who were increasing their stakes meaningfully (or already accumulated large positions). 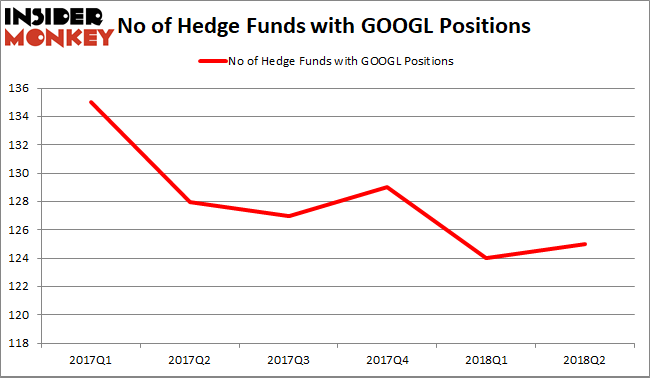 The largest stake in Alphabet Inc (NASDAQ:GOOGL) was held by Fisher Asset Management, which reported holding $1389.3 million worth of stock at the end of June. It was followed by Citadel Investment Group with a $1323.7 million position. Other investors bullish on the company included Thunderbird Partners, Brave Warrior Capital, and Marble Arch Investments.

As one would reasonably expect, some big names were breaking ground themselves. Soroban Capital Partners, managed by Eric W. Mandelblatt and Gaurav Kapadia, assembled the most valuable position in Alphabet Inc (NASDAQ:GOOGL). Soroban Capital Partners had $393.7 million invested in the company at the end of the quarter. Gabriel Plotkin’s Melvin Capital Management also made a $568.6 million investment in the stock during the quarter. The other funds with new positions in the stock are Paul Holland and Matthew Miller’s Glaxis Capital Management, David Abrams’s Abrams Capital Management, and Matthew Knauer and Mina Faltas’s Nokota Management.

As you can see these stocks had an average of 148.25 hedge funds with bullish positions and the average amount invested in these stocks was $20.6 billion. That figure was $14.8 billion in GOOGL’s case. Facebook Inc (NASDAQ:FB) is the most popular stock in this table. On the other hand Alibaba Group Holding Ltd (NYSE:BABA) is the least popular one with only 117 bullish hedge fund positions. Overall, hedge funds are extremely bullish about Alphabet. We decided to report separate stats for each class of Alphabet shares which is why it isn’t the top stock in our list.

Alphabet is in the portfolios of nearly 3 out of every 10 hedge funds. However, collectively hedge funds own only 3.6% of Alphabet’s outstanding shares. This means hedge funds are actually underweight Alphabet. Moreover, this week at the Sohn San Francisco Conference Longtail Alpha’s Vineer Bhansali recommended shorting Alphabet shares. He thinks tech stocks will underperform in a rising interest rate environment. You can see what else hedge funds were recommending at this conference on our site.

We wouldn’t short Alphabet shares but we also think we will have better opportunities in the future to initiate a new position in the stock.

Apple, Cirrus Logic, GoPro, and More: Here’s Why These Stocks Are On...
Monthly Newsletter Strategy
Download a free copy of our newsletter and see the details inside!
Hedge Fund Resource Center
Related News
What??? Are Hedge Fund Hotels Really Getting Liquidated? 2 Reasons Why Alphabet Inc. (GOOG) Is Way Overvalued and Should Be Regulated Facebook Dominates List of Most Popular Tech Stocks Among Hedge Funds Blockchain is About to Change the Way You See Ads – and You don’t Need a New Browser Facebook Inc (FB) & Amazon.com, Inc. (AMZN) Among Billionaires’ Favorite Tech Stocks Will Google’s History of Stifling Competition Bring About Its Regulatory Demise? Bloomberg Is Wrong About Hedge Funds Dumping Facebook and Google 5 Ways You Can Eliminate Credit Card Debt 10 Easiest Road Test Sites in NY and NJ 10 Hottest Selling Products in the USA in 2018
Billionaire Hedge Funds