With the SPDR S&P Biotech Index up 37% over the trailing-12-month period, it’s evident that investment dollars are willingly flowing into the biotech sector. Keeping that in mind, let’s have a look at some of the rulings, studies, and companies that made waves in the sector last week.

You can forget all about earnings reports this week, because we had more than enough clinical data, Food and Drug Administration panel reviews, and FDA decisions to last us for a long time. In fact, things were so busy that I’m splitting this week’s review into two parts. Let’s first look at any and all FDA actions this week. 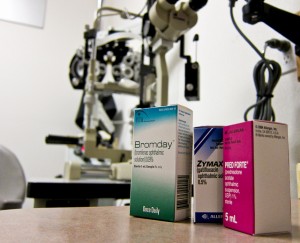 This week’s lone PDUFA decision by the Food and Drug Administration turned out to be a disappointment for Allergan, Inc. (NYSE:AGN) shareholders, as inhaled migraine medication Levadex was rejected for a second time. Once again, the FDA expressed concerns about Allergan, Inc. (NYSE:AGN)’s manufacturing partner Exemplar Pharma, which it recently purchased for less than $20 million. It’s likely that the FDA will want to reinspect the facility before approving Levadex, but from a safety and efficacy standpoint, there doesn’t seem to be anything that would stand in the way of its eventual approval.

The FDA’s panels were also very busy this week, dishing out their recommendations and findings on three separate biotech companies.

Theravance Inc (NASDAQ:THRX) and GlaxoSmithKline plc (ADR) (NYSE:GSK) both jumped considerably this week following a positive recommendation from the FDA’s panel regarding their inhalable long-term COPD treatment, Breo Ellipta. Breo is a powdered combination of Theravance Inc (NASDAQ:THRX)’s long-acting beta-2 agonists with GlaxoSmithKline plc (ADR) (NYSE:GSK)’s long-acting muscarinic antagonists, and it’s delivered through a device known as Ellipta. The FDA’s panel on Wednesday recommended approval for Breo by a vote of 9-4, noting that it reduced COPD exacerbations and aided airflow in obstructed pathways. The panel also voted 10-3 that Breo was safe given the indications it was aiming to be approved for. With multibillion-dollar sales potential, this is another big step for Theravance Inc (NASDAQ:THRX) and a sign of relief for GlaxoSmithKline plc (ADR) (NYSE:GSK) shareholders.

Endo Health Solutions Inc (NASDAQ:ENDP)‘ FDA panel findings on hyopgonadism treatment Aveed were confusing, yet again. The once-every-10-week injection saw a split vote of 9-9 in favor of recommending the drug for approval by the FDA’s panel. In one corner, supporters point to Aveed’s having been approved in Europe since 2003 and to the lack of reported deaths from its use. On the other hand, Aveed has been on and off the FDA’s desk since 2007 without gaining approval because of very rare, but nasty, potential side effects of the injection, including anaphylaxis and pulmonary oil microembolism. Whether or not the FDA will approve Aveed this time around is really anyone’s guess.
Share Tweet Email
Page 1 of 2
Next >>
See All