Allegion plc (NYSE:ALLE) has experienced an increase in support from the world’s most elite money managers recently. Our calculations also showed that ALLE isn’t among the 30 most popular stocks among hedge funds (see the video below).

Unlike this former hedge fund manager who is convinced Dow will soar past 40000, our long-short investment strategy doesn’t rely on bull markets to deliver double digit returns. We only rely on hedge fund buy/sell signals. Let’s take a look at the recent hedge fund action encompassing Allegion plc (NYSE:ALLE).

At the end of the second quarter, a total of 24 of the hedge funds tracked by Insider Monkey were long this stock, a change of 14% from one quarter earlier. On the other hand, there were a total of 12 hedge funds with a bullish position in ALLE a year ago. With hedge funds’ positions undergoing their usual ebb and flow, there exists an “upper tier” of notable hedge fund managers who were boosting their holdings substantially (or already accumulated large positions). 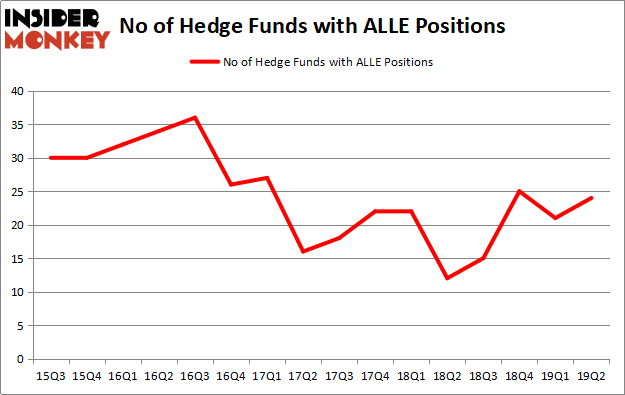 Of the funds tracked by Insider Monkey, David Blood and Al Gore’s Generation Investment Management has the biggest position in Allegion plc (NYSE:ALLE), worth close to $212.5 million, amounting to 1.5% of its total 13F portfolio. The second largest stake is held by Intermede Investment Partners, led by Barry Dargan, holding a $77.7 million position; the fund has 4.6% of its 13F portfolio invested in the stock. Some other members of the smart money with similar optimism comprise John Overdeck and David Siegel’s Two Sigma Advisors, Clint Carlson’s Carlson Capital and Dmitry Balyasny’s Balyasny Asset Management.

As industrywide interest jumped, specific money managers were breaking ground themselves. Carlson Capital, managed by Clint Carlson, assembled the most outsized position in Allegion plc (NYSE:ALLE). Carlson Capital had $26.9 million invested in the company at the end of the quarter. Renaissance Technologies also made a $11 million investment in the stock during the quarter. The other funds with brand new ALLE positions are Brandon Haley’s Holocene Advisors, Ben Levine, Andrew Manuel and Stefan Renold’s LMR Partners, and Richard Driehaus’s Driehaus Capital.

As you can see these stocks had an average of 24.5 hedge funds with bullish positions and the average amount invested in these stocks was $747 million. That figure was $406 million in ALLE’s case. AXA Equitable Holdings, Inc. (NYSE:EQH) is the most popular stock in this table. On the other hand Camden Property Trust (NYSE:CPT) is the least popular one with only 19 bullish hedge fund positions. Allegion plc (NYSE:ALLE) is not the least popular stock in this group but hedge fund interest is still below average. This is a slightly negative signal and we’d rather spend our time researching stocks that hedge funds are piling on. Our calculations showed that top 20 most popular stocks among hedge funds returned 24.4% in 2019 through September 30th and outperformed the S&P 500 ETF (SPY) by 4 percentage points. Unfortunately ALLE wasn’t nearly as popular as these 20 stocks (hedge fund sentiment was quite bearish); ALLE investors were disappointed as the stock returned -6% during the third quarter and underperformed the market. If you are interested in investing in large cap stocks with huge upside potential, you should check out the top 20 most popular stocks among hedge funds as many of these stocks already outperformed the market so far in 2019.