This morning the Department of Labor reported that there were 341,000 new initial unemployment claims last week, close to the five-year low of 330,000. That’s 27,000 below last week’s number of 368,000 and below analyst expectations of a fall to 360,000. The less volatile four-week moving average moved up 1,500 to 352,000. We will have to wait and see if this is a temporary dip from last week’s snowstorm or if the downtrend is real. 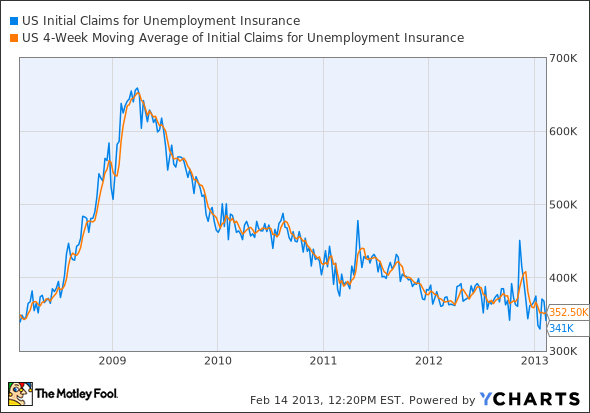 The aluminum market has seen some hard times since the boom of 2005 to 2008. Aluminum prices are down 33% from the highs hit in 2008 as an inventory glut and slowdown in the world economy hit prices hard.

Alcoa was lucky to avoid buying Alcan at the peak of the market in 2008, being outbid by Rio Tinto plc (ADR) (NYSE:RIO) , which paid an astronomically high $38 billion. Without the crippling acquisition, Alcoa has been able to take many steps to cut costs and take high-cost production facilities offline. While the aluminum market looks like it will grow slowly this year, the long-term outlook is bright, as many car manufacturers are switching to the metal to keep weight down and fuel efficiency up.

The article Alcoa Leads the Dow Higher originally appeared on Fool.com and is written by Dan Dzombak.