Is Air Products & Chemicals, Inc. (APD) A Good Stock To Buy According To Hedge Funds?

Hedge fund managers like David Einhorn, Dan Loeb, or Carl Icahn became billionaires through reaping large profits for their investors, which is why piggybacking their stock picks may provide us with significant returns as well. Many hedge funds, like Paul Singer’s Elliott Management, are pretty secretive, but we can still get some insights by analyzing their quarterly 13F filings. One of the most fertile grounds for large abnormal returns is hedge funds’ most popular small-cap picks, which are not so widely followed and often trade at a discount to their intrinsic value. In this article we will check out hedge fund activity in another small-cap stock: Air Products & Chemicals, Inc. (NYSE:APD).

Is Air Products & Chemicals, Inc. (NYSE:APD) a first-rate stock to buy now? The smart money is turning bullish. The number of bullish hedge fund positions improved by 6 lately. Our calculations also showed that APD isn’t among the 30 most popular stocks among hedge funds. 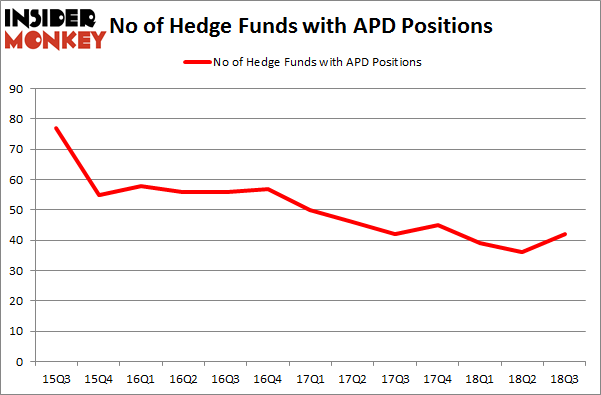 When looking at the institutional investors followed by Insider Monkey, Jonathan Barrett and Paul Segal’s Luminus Management has the number one position in Air Products & Chemicals, Inc. (NYSE:APD), worth close to $287.6 million, amounting to 5.8% of its total 13F portfolio. Coming in second is Samlyn Capital, led by Robert Pohly, holding a $107.5 million position; the fund has 2.4% of its 13F portfolio invested in the stock. Remaining professional money managers with similar optimism contain John Overdeck and David Siegel’s Two Sigma Advisors, Brandon Haley’s Holocene Advisors and PVH’s D E Shaw.

As you can see these stocks had an average of 35.25 hedge funds with bullish positions and the average amount invested in these stocks was $1.70 billion. That figure was $1.33 billion in APD’s case. Marathon Petroleum Corp (NYSE:MPC) is the most popular stock in this table. On the other hand BCE Inc. (NYSE:BCE) is the least popular one with only 17 bullish hedge fund positions. Air Products & Chemicals, Inc. (NYSE:APD) is not the most popular stock in this group but hedge fund interest is still above average. This is a slightly positive signal but we’d rather spend our time researching stocks that hedge funds are piling on. In this regard MPC might be a better candidate to consider a long position.