Sometimes it pays to just pay attention to the boring things in life. Think health food. Think farming. Or think of stuff that’s behind those corn fritters and tortillas on your plate. Unexciting as they may sound, but if it weren’t  for fertilizers, you would hardly get to eat anything!

So as a prudent investor, you should start weighing fertilizer stocks as well if you still haven’t. With the U.S. spring planting season around the corner and the recent bashing the fertilizer industry has taken, time is ripe to get your hands on some stocks.

The top three nutrients farmers apply include nitrogen, potash, and phosphate. Among these, nitrogen is most critical for essential crops like corn and alone accounts for more than half the total nutrients consumed in the U.S. Prices of nitrogen firmed up over the past few years while those of potash and phosphate hardly moved. Not surprisingly, nitrogen-centric companies have consistently outperformed peers that focus on the other nutrients. I’ve hand-picked two graphs for you that sum up the story. Take a look. This graph, presented by Michigan State University Extension, depicts the price trend of key nutrients from November 2010 to September 2012. Anhydrous ammonia, urea, and liquid nitrogen are compounds of nitrogen. DAP and MAP are phosphate products. The trend lines explain the rest.

Here’s the second, and more important graph for you as an investor. 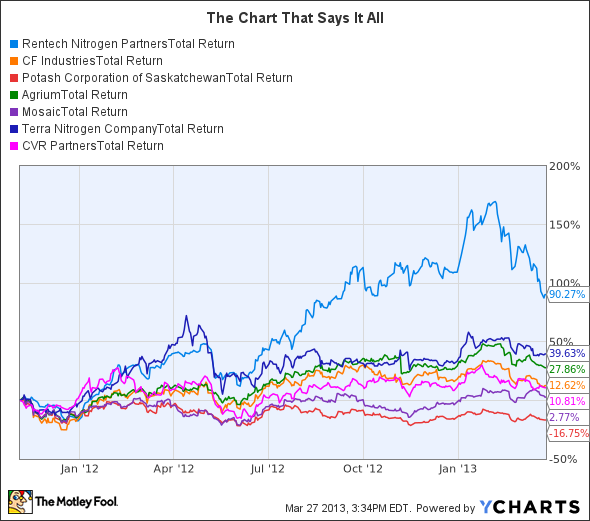 That’s some riot of color! Take a deep breath and look closely – You’ll see how of the seven stocks mentioned, the top five revolve around nitrogen, and each has returned above 10% returns over the past year.

Rentech Nitrogen Partners LP (NYSE:RNF), CF Industries Holdings, Inc. (NYSE:CF), Terra Nitrogen Company, L.P. (NYSE:TNH), Agrium Inc. (USA) (NYSE:AGU), and CVR Partners LP (NYSE:UAN) get a major portion of their revenue from nitrogen. Mosaic Co (NYSE:MOS) and IC POTASHCORP. (FRA:ECA1) are the outliers above. Why? While the former gets 70% revenue from phosphate and the rest from potash, PotashCorp is 70% potash and phosphate combined and 30% nitrogen. So you can also guess why PotashCorp generated better returns than Mosaic.

Nitrogen rules the fertilizer industry, and I don’t see it losing the crown for years to come, going by the long-term trend of the nutrient’s usage and prices. Just one statistic sums up the bullish story for nitrogen – As per the U.S. Department of Agriculture’s recent report, 97% of the corn acres planted in 2010 received some form of nitrogen fertilizer. Naturally, nitrogen is one nutrient that should never see a dry day.

That means if an investor wants to have a piece of the fertilizer growth story, nitrogen looks like the best bet. The $64,000 question is — which stock should you go for? This is how my personal ranking goes.

PotashCorp excites me the least, simply because it gets less than a third of sales from nitrogen. Worse, when most peers are counting advantages of low prices of key input natural gas, PotashCorp is battling gas supply disruptions from Trinidad resulting in steep gas costs. Pros: PotashCorp has a solid global presence, is generating high free cash flow, shoulders low debt, and increased dividend by a staggering 700% since 2011. Cons: Demand for potash and phosphate is low, and at 17 times P/E and 11 times price-to-cash flow, PotashCorp commands higher valuation than peers.