Biotech companies can make you rich if you buy the right ones at the right time. They can also make you poor; but let’s not dwell on the negative.

If you’d owned these three biotech companies at the beginning of the year, you’re sitting on around a triple compared to a relatively smaller-but-still-impressive 34% increase in the Nasdaq Biotechnology Index. 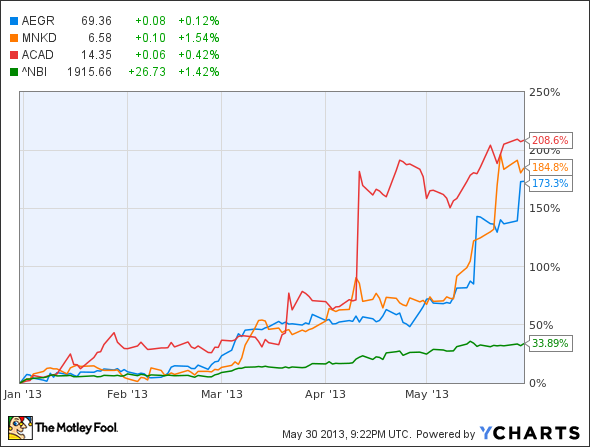 Let’s take a look at what’s driven the biotech companies to increase in price and whether they’re still a buy at the new price.

This isn’t crazy
ACADIA Pharmaceuticals Inc. (NASDAQ:ACAD) spiked in April after the Food and Drug Administration threw the biotech company a bone and said ACADIA wouldn’t have to run a second phase 3 trial for pimavanserin in patients with Parkinson’s disease psychosis.

The move was a double bonus because it reduced the time it’ll take to get pimavanserin on the market and eliminated the chance of a failure in the second phase 3 trial. While the drug passed its most recent phase 3 trial just fine, the symptoms of Parkinson’s disease psychosis are somewhat subjective. Knowing that the drug worked in a phase 3 trial already could increase the placebo effect, making it hard to repeat the results. Now ACADIA Pharmaceuticals Inc. (NASDAQ:ACAD) doesn’t have to.

We’ve got a blockbuster
Aegerion Pharmaceuticals, Inc. (NASDAQ:AEGR)‘s  big spike in mid-May came after management said at a Bank of America Merrill Lynch health-care conference that its cholesterol-lowering drug Juxtapid could have a $1 billion market for the genetic disease it treats. Analysts quickly regurgitated the biotech company’s assertions, increasing their price targets accordingly.

Claiming blockbuster potential isn’t exactly a revolutionary thing for a biotech company to say. It seems like almost every orphan-drug maker arrives at the annual price of its drug by dividing $1 billion by the number of patients it thinks exist.

Anticipation
MannKind Corporation (NASDAQ:MNKD)‘s rise doesn’t appear to be due to anything that the biotech company has done, but what investors expect the company will do in the future. Specifically, investors are anticipating the release of data this summer for its phase 3 trials testing inhaled insulin Afrezza.

The FDA made the company run new trials after it improved the device that delivers the insulin, but since the underlying drug hasn’t changed, it seems extremely likely that the drug will meet its clinical endpoints.