Advanced Energy Industries, Inc. (NASDAQ:AEIS) has seen a decrease in activity from the world’s largest hedge funds recently. AEIS was in 14 hedge funds’ portfolios at the end of the second quarter of 2019. There were 17 hedge funds in our database with AEIS positions at the end of the previous quarter. Our calculations also showed that AEIS isn’t among the 30 most popular stocks among hedge funds (see the video below).

At the end of the second quarter, a total of 14 of the hedge funds tracked by Insider Monkey were bullish on this stock, a change of -18% from the previous quarter. The graph below displays the number of hedge funds with bullish position in AEIS over the last 16 quarters. With hedgies’ capital changing hands, there exists an “upper tier” of notable hedge fund managers who were increasing their stakes meaningfully (or already accumulated large positions). 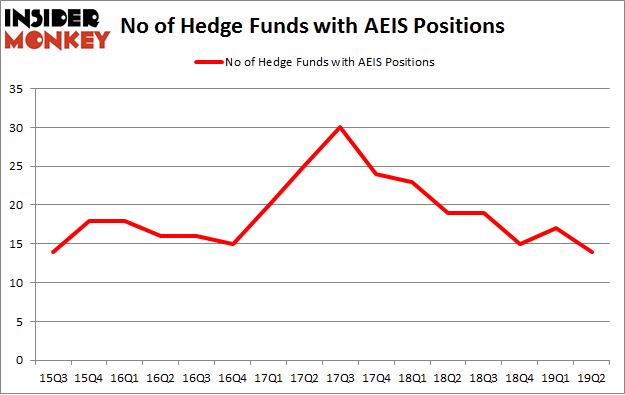 According to publicly available hedge fund and institutional investor holdings data compiled by Insider Monkey, Renaissance Technologies has the number one position in Advanced Energy Industries, Inc. (NASDAQ:AEIS), worth close to $71 million, corresponding to 0.1% of its total 13F portfolio. Coming in second is Royce & Associates, managed by Chuck Royce, which holds a $30.2 million position; the fund has 0.3% of its 13F portfolio invested in the stock. Remaining hedge funds and institutional investors that hold long positions include Noam Gottesman’s GLG Partners, Ken Fisher’s Fisher Asset Management and Steven Baughman’s Divisar Capital.

Due to the fact that Advanced Energy Industries, Inc. (NASDAQ:AEIS) has experienced declining sentiment from hedge fund managers, it’s safe to say that there were a few funds who sold off their positions entirely in the second quarter. At the top of the heap, Peter Rathjens, Bruce Clarke and John Campbell’s Arrowstreet Capital dropped the largest investment of the “upper crust” of funds tracked by Insider Monkey, comprising about $7.2 million in stock, and Jeffrey Moskowitz’s Harvey Partners was right behind this move, as the fund dropped about $1 million worth. These moves are interesting, as aggregate hedge fund interest was cut by 3 funds in the second quarter.

As you can see these stocks had an average of 15.5 hedge funds with bullish positions and the average amount invested in these stocks was $212 million. That figure was $139 million in AEIS’s case. Commercial Metals Company (NYSE:CMC) is the most popular stock in this table. On the other hand Trustmark Corporation (NASDAQ:TRMK) is the least popular one with only 14 bullish hedge fund positions. Compared to these stocks Advanced Energy Industries, Inc. (NASDAQ:AEIS) is even less popular than TRMK. Our calculations showed that top 20 most popular stocks among hedge funds returned 24.4% in 2019 through September 30th and outperformed the S&P 500 ETF (SPY) by 4 percentage points. A small number of hedge funds were also right about betting on AEIS, though not to the same extent, as the stock returned 2% during the third quarter and outperformed the market as well.