Insider Monkey finished processing more than 700 13F filings made by hedge funds and prominent investors. These filings show these funds’ portfolio positions as of June 30. In this article we are going to take a look at smart money sentiment towards Appian Corporation (NASDAQ:APPN).

Appian Corporation (NASDAQ:APPN) shares haven’t seen a lot of action during the fourth quarter. Overall, hedge fund sentiment was unchanged. The stock was only in 4 hedge funds’ portfolios at the end of June, but one of these hedge funds, Abdiel Capital, was extremely bullish about this stock. The level and the change in hedge fund popularity aren’t the only variables you need to analyze to decipher hedge funds’ perspectives. A stock may witness a boost in popularity but it may still be less popular than similarly priced stocks. That’s why at the end of this article we will examine companies such as Alamos Gold Inc (NYSE:AGI), Trustmark Corp (NASDAQ:TRMK), and Liberty Oilfield Services Inc. (NYSE:LBRT) to gather more data points.

Heading into the fourth quarter of 2018, a total of 4 of the hedge funds tracked by Insider Monkey were bullish on this stock, a change of 0% from the previous quarter. Below, you can check out the change in hedge fund sentiment towards APPN over the last 6 quarters. With hedge funds’ capital changing hands, there exists a few noteworthy hedge fund managers who were boosting their holdings substantially (or already accumulated large positions). 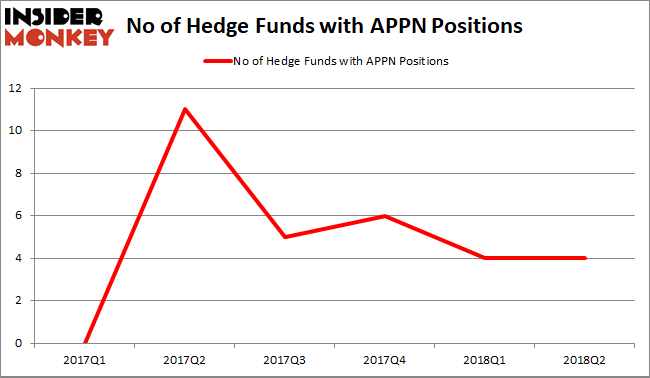 Of the funds tracked by Insider Monkey, Colin Moran’s Abdiel Capital Advisors has the number one position in Appian Corporation (NASDAQ:APPN), worth close to $208.5 million, comprising 17.5% of its total 13F portfolio. In recent regulatory filings Abdiel Capital revealed increasing its position to nearly 6.9 million shares from 5.8 million shares at the end of June. Abdiel’s most recent purchase was on Thursday, a purchase of 1200 shares at a price of $25 per share. On Abdiel Capital Advisors’s heels is D E Shaw, led by D. E. Shaw, holding a $4.9 million position; less than 0.1%% of its 13F portfolio is allocated to the company. Other peers with similar optimism encompass Phil Frohlich’s Prescott Group Capital Management, Steve Cohen’s Point72 Asset Management and .

Judging by the fact that Appian Corporation (NASDAQ:APPN) has faced declining sentiment from the smart money, logic holds that there exists a select few funds that decided to sell off their entire stakes last quarter. At the top of the heap, Brian Ashford-Russell and Tim Woolley’s Polar Capital dumped the biggest investment of all the hedgies monitored by Insider Monkey, valued at an estimated $3.3 million in stock, and David Atterbury’s Whetstone Capital Advisors was right behind this move, as the fund cut about $2.2 million worth. These bearish behaviors are interesting, as total hedge fund interest stayed the same (this is a bearish signal in our experience).

As you can see these stocks had an average of 15.75 hedge funds with bullish positions and the average amount invested in these stocks was $192 million. That figure was $214 million in APPN’s case. Avaya Holdings Corp. (NYSE:AVYA) is the most popular stock in this table. On the other hand Liberty Oilfield Services Inc. (NYSE:LBRT) is the least popular one with only 7 bullish hedge fund positions. Compared to these stocks Appian Corporation (NASDAQ:APPN) is even less popular than LBRT. Considering that hedge funds other than Abdiel aren’t fond of this stock in relation to other companies analyzed in this article, it may be a good idea to analyze it in detail and understand why the smart money isn’t behind this stock. This isn’t necessarily bad news. Abdiel Capital is actually one of the best performing hedge funds during Q2. We usually recommend investors to take a look at the 25 most popular stocks among hedge funds for investment ideas but in this case we are going to make an exception and ask our readers to take a closer look at Appian. The company has more than $100 million in cash which it uses to invest in growth. Its subscription revenue is growing at a health ~40% rate. The stock lost a third of its value in the last couple of months due to market volatility and concerns about a rising interest rate environment. This may provide a good entry point for new investors.