A few quarters ago, I owned Activision Blizzard, Inc. (NASDAQ:ATVI) shares, but sold them because it did not look like the market would ever appreciate its value. At the time, investors worried about the overhang of Vivendi owning a large percentage of the company. Today, Activision is now up 74% this year. Is it time to sell?

Vivendi said it would sell $5.8 billion worth of its Activision Blizzard, Inc. (NASDAQ:ATVI) shares back to Activision for $13.60 per share, at a 10% discount at the time. Vivendi will lose its majority shareholder title, and will be left with just 12% of the company by still holding 83 million shares. The deal would boost earnings by between 23% and 33% (non-GAAP). Earnings will rise by between 18% and 29% on a GAAP basis. Activision will finance the deal by issuing debt: a whopping $4.6 billion. The $1.2 billion in domestic cash will also be used to fund the purchase. This leaves a comfortable $3 billion of cash on the balance sheet.

The share buyback merits a rally in Activision Blizzard, Inc. (NASDAQ:ATVI) shares because the company will not have Vivendi as a majority shareholder. Activision should have greater freedom in pursuing its business objectives without the meddling of Vivendi. The problem with this argument is that Vivendi never interfered with the way Activision was run. The conglomerate only distracted Activision by seeking ways to sell its position.

Activision must believe that it can generate a return higher than the interest paid to fund its debt. The company is doing well on most products. The game Call of Duty, for example, is a solid franchise that breaks records every time a new version is release. Conversely, popularity for World of Warcraft is dropping precipitously. Monthly subscribers dropped to 7.7 million, down from 8.3 million in May. If users continue to lose interest, a drop in subscriptions could make it more difficult for Activision Blizzard, Inc. (NASDAQ:ATVI) to fund its debt load.

A strain on its balance sheet could force Activision to cut operating costs, which would includes jobs.

Take-Two Interactive Software, Inc. (NASDAQ:TTWO) is set to release Grand Theft Auto 5 this September. Shares are already up 29.4% in the last six months, so investors might want to wait for a pull-back: 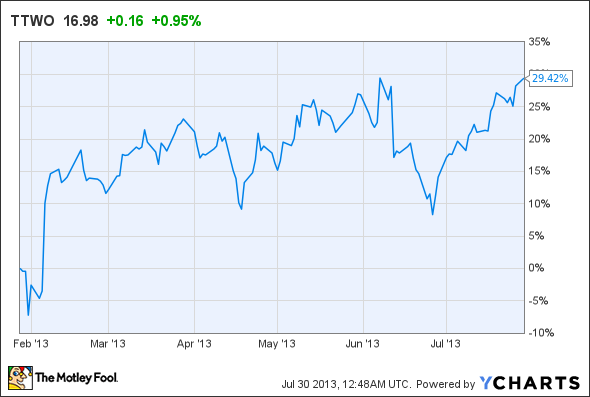